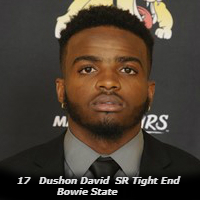 Bowie State Head Coach Damon Wilson had to know that his bulldogs were destined to prosper with an agile big man at tight end with hands. Not to mention that same big man in the form of Dushon David literally has the word prosper within the spelling of his middle name (Prospere). David and the bulldogs found themselves in the land of prosperity all season long defeating every opponent that dared to walk onto the same playing field during the regular season.

Dushon and the Bulldogs did not lose a game until the Division two playoffs and the Senior was instrumental in helping the air attack soar, Hauling in 40 receptions averaging 16 yards per reception. Manning the tight end position David took on the job of blocking and running pass routes. This Bulldog was an intricate  part of an offensive line that lead the way for a Bowie State offensive attack that averaged 39 points per game and 422 yards of total offense per contest.

The Lineman/Receiver made trips to the house 10 times ranking him ninth amongst all HBCU receivers in that category (Including wide outs). David caught a pass in 11 of the 12 games the bulldogs had this past season. He also had 2 games of over 100 yards receiving, not to mention he had 6 games of over 50 yards receiving.Dushon registered  a season high 117 yards receiving On September 28 in the 54-6 win over Saint Augustine’s.

All conference , All American. Thankful for this game, life lessons and brotherhoods. All glory to the most high. pic.twitter.com/tq9E5xwFgY

The D.C. Native was most definitely instrumental in helping Bowie State finish the 2019 season with 11 wins against only 1 loss and ranked number Three  on The Final 2019 Urban Media Today Black College Football Poll.