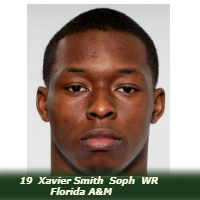 Florida A&M  Head Coach Willie Simmons had to be truly happy this season with his air attack ;considering the Rattler offense had an awesome receiver in the form of Red-Shirt Sophomore Xavier Smith. The speedster from Haines City Florida hauled in 77 receptions averaging 15 yards per catch; Thats a first down every time Smith caught the ball.

Xavier caught 11 TD passes this season and averaged 105 yards per game. Number 19 also found time to return a punt and 2 kick offs this season. Meanwhile he had  6 games this season with over 100 yards receiving and he averaged 20 yards or more per catch in 4 games. The Rattler wide out also had one game where he had 98 yards receiving.

The big game for Zay Smith had to be on September 21,2019 against Southern. Xavier showed up and showed out catching 9 passes for 201 yards in the 27-21 win over the Jaguars. His longest reception of the game was 43 yards, but it was the 17 yard touchdown reception he grabbed late in the game that was the deal breaker.

The Rattler Wide Out was most definitely instrumental in helping  FAMU finish the 2019 season with 9 wins against only  2 losses and ranked number two on The Final 2019 Urban Media Today Black College Football Poll.