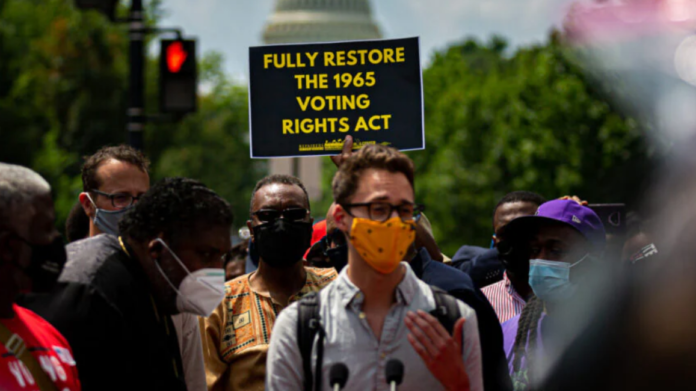 Biden and Harris made a visit to The King Center for Nonviolent Social Change and the famed Ebenezer Baptist Church before heading to the campuses of Atlanta’s top HBCUs — Morehouse College, Spelman College and Clark Atlanta University — to deliver remarks pushing for the passing of voting rights reform and the elimination of the filibuster.

While Dr. King advocated for the ending of racial segregation and poverty in Black and marginalized communities, one of the major pillars of Dr. King’s work as an activist was voting rights.

Both President Biden and Vice President Harris evoked Dr. King’s leadership in the civil rights push for voting rights in 1960s, drawing a connection between then and now.

“The only normalcy anyone should accept, Dr. King said, is the normalcy of justice and his words resonate today,” said Harris.

“Anti-voter laws are not new in our nation but we must not be deceived into thinking they are normal,” said Harris.

“Americans of all stripes will praise [Dr. King] for the content of his character. But as Dr. King’s family said before, it’s not enough to praise their father. They even said on this holiday, don’t celebrate his birthday unless you’re willing to support for what he lived for and died for.”

In an exclusive interview with theGrio, Bernice A. King, the daughter of Dr. King and the head of The King Center said of the president and vice president’s visit South, “it is kind of hard to come here [The King Center] and your conscience not be pricked if you have one.”

Ms. King, who acknowledged to theGrio that she spoke with Vice President Harris about voting rights a few months back, questions how The Republican Party that reauthorized The Voting Rights Act of 1965 in 2006 is the same Republican Party in 2022 that has made it clear that they do not support the passing of new legislation that would both protect and strengthen the right to vote.

Black leaders have warned President Biden and his administration that if voting rights legislation is not passed, it will spell disaster at the polls for Democrats in the 2022 midterm elections and Biden’s presidential reelection bid in 2024.

Biden chastised Republicans across the nation for disenfranchising minority and disadvantaged Americans through voter suppression laws, and slammed Senate Republicans for relying on the filibuster to “weaponize” and “abuse.”

The president said he supported doing whatever it takes to “protect our democracy,” including changing Senate rules on the filibuster. “The right to vote is a right from which all other rights flow,” he added.

Currently, there are at least 19 states that have passed into law bills that make it more challenging for Black and minority voters, as well as younger Americans and those with disabilities to cast their ballot, according to the Brennan Center for Justice.

Reforming the filibuster could potentially make way for voting rights reform through the John Lewis Voting Rights Advancement Act and The Freedom to Vote Act, which have been stalled in the U.S. Senate.

The 1965 Voting Rights Act was gutted twice by the United States Supreme Court. Currently, the filibuster allows for the minority group of senators to override a majority with this delay tactic. And without support for reforming the Senate tool, the Voting Rights Act will remain weakened amid a wave of voter suppression laws being passed across the country.

President Biden’s slow coming support behind filibuster reform is getting the support of U.S. Congresswoman Sheila Jackson Lee of Texas who calls the filibuster a “racist tool” against freedom.

”The filibuster is a sin against justice, dignity and equality. The filibuster history is that of denial and discrimination. We must work with the president to cure this injustice by elimination or reform. Voting in 2022 will be in danger,” Jackson Lee told theGrio.

The filibuster and voting rights have drawn the ire of many who have watched the Voting Rights Act of 1965 gutted by The U.S. Supreme Court that has subsequently allowed for Americans to vote without its full protections.

Jackson Lee is currently the focus of a voting rights fight in Texas, where the state’s redrawn congressional map has altered district lines and diluted the voting power of Black and Brown communities, particularly its Hispanic residents. The gerrymandering issue would also cut Jackson Lee out of her congressional seat if the court upholds the Texas state legislature’s proposed map.

Ben Jealous of The People For the American Way is planning to attend the president and vice president’s speech in Atlanta and is “very optimistic that they won’t disappoint us.” Jealous had been one of a number of Black leaders holding such rallies in the nation’s Capital hoping to persuade President Biden to lean in on supporting an end to the filibuster.

Months of protests in front of the White House, at Capitol Hill and in front of the Supreme Court, where hundreds were arrested, has now led Jealous and others to attend Biden and Harris’s remarks in hopes to hear a message of urgency.

When Democratic U.S. Congresswoman Maxine Waters was asked about the president’s new push for voting rights, the longtime California lawmaker blamed the lack of passage squarely at the feet of two people: Senator Joe Manchin of West Virginia and Senator Krysten Sinema of Arizona.

“To be stymied in the way that we have been stymied by Manchin and Sinema is unforgivable,” Congresswoman Waters told theGrio, slamming the Democratic senators for not just refusing to support filibuster reform in order to pass voting rights legislation, but also essentially torpedoing President Biden’s agenda for Black and underserved communities.

“I expect him to work hard on these bills that are languishing in the Senate on voting rights [and] I want the president to do everything that he possibly can to get voting rights passed out,” added Waters.

Ironically, Sinema represents the state of Arizona, which was the last U.S. state to recognize the King national holiday. Now, a U.S. senator hailing from the state is holding up voting rights, one of the key pillars of Dr. King’s legacy.

U.S. Senator Chuck Schumer of New York exclusively told theGrio, “As a result of Donald Trump’s Big Lie that attacked the results of a free and fair election in an effort to hold onto power, there has been a racist effort by Republican-led state legislatures across the country to limit the right of American citizens to vote.

“I can tell you this—as Majority Leader, I am doing everything I can to move voting rights protections forward. There are a variety of possible rules changes, and we are exploring them all,” added Schumer. “The future of our democracy and our country depends on it.”

Cedric Richmond, a Morehouse graduate and the head of the office of Public engagement and senior advisor to President Biden, has been working with the presidents of Morehouse, Spelman and Clark Atlanta for the White House travel event.

Earlier in the day, President Biden met with the King family at The King Center to lay a wreath at the burial site of Dr. King and his wife Coretta Scott King.

President Biden and Vice President Harris also made a stop at Ebenezer Baptist Church, the church formally pastored by Dr. King and now shepherded by U.S. Senator Raphael Warnock. It was also once the home church of the late civil rights icon, John Lewis. The voting rights legislation named after him is now at the center of this political push in Washington, with no clear ending in sight.