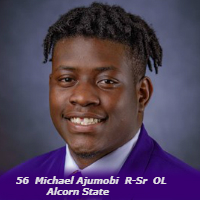 One of many shining lights in a great season for Coach Fred McNair and his Alcorn State Braves  was  converted tight end Michal Ajumobi playing 13 games at Left Tackle. The Braves finished the year with only 9 wins against 4 losses and had an offense that churned out 155 yards per game on the ground and 251 yards per contest in the air. The Senior from Dallas , Texas was a major part of the offensive front that protected  Quarterbacks and opened holes for the running backs.

Congratulations to all of our @AlcornStateFB honorees! Big time awards and we’ll deserved! https://t.co/AJoeDdWkvJ

As a matter of fact Ajumobi was a major part of the offensive front as he allowed the fewest sacks and graded out with the highest grade among the Alcorn State Lineman. I’m sure coach McNair is grateful to have had the fleet footed left tackle lead the way for his Braves offensive which scored 55 touchdowns this season and finished in the top 15 in all of FCS football in passing efficiency (Keep in mind playing left tackle  Ajumobi protected the Quarterbacks blind side).

AJumobi and the Braves finished the season scoring 44 points in the Celebration Bowl (the most points scored in post season in ASU football history).Despite coming up on the short end against North Carolina A&T the Braves still achieved a successful season finishing ranked 4th on The Final 2019 Urban Media Today Black College Football Poll.