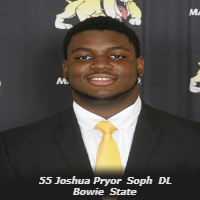 Bowie State Head Coach Damon Wilson had to know what opponents did not know when he sent his bulldog defense on the field. That is that a young man on  his defensive line was going to be a problem for opposing Running backs and Quarterbacks.  That is exactly what Joshua Pryor was a headache for the other team, not to mention the lineman placed between him and the QB.

Pryor and the Bulldogs did not lose a game until the division two playoffs and by that time all quarterbacks who faced the Black and Gold  knew they were in for a challenge. The big man from B-more finished the season with 70 tackles and 35 of those were all by his lonesome. The reason I mentioned Quarterbacks and Running Backs when talking about the defensive lineman is his tackles for loss. Number 55 gobbled up 25 tackles for loss; translating to 133 yards lost for the opponents. JP munched down on opposing signal callers 13 times this year and the quarterback sacks were an additional 104 yards lost for Bulldog foes.

This up and coming defensive lineman  had an outstanding season. He registered at least 5 tackles in 10 games; he had a season high 10 tackles in games against Elizabeth City State and Fayetteville State. In the game against the Broncos he even sacked the QB 3 times.The Charm City native was most definitely instrumental in helping Bowie State finish the 2019 season with 11 wins against only 1 loss and ranked number Three  on The Final 2019 Urban Media Today Black College Football Poll.