During the month of February, (Black History Month) members of the All-American team will be featured on the UrbanmediaToday.com website daily. Today we spot light: 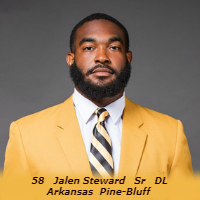 The Golden Lions had a big man adding to the roar of the Black and Gold in 2019 and much of  that volume came from 6’4″ Defensive lineman Jalen Steward.  Steward was  a major part of the Arkansas Pine Bluff  Defensive front racking up 61 tackles, 16.5 tackles for loss , 5 Sacks and 13  Quarterback hurries.

The young gladiator from Memphis, Tennessee had his most productive game on November 2,2019  against the Tigers of Jackson  State. Despite APBU coming up on the short end of a 21-12  score , there is no doubt Steward left it all on the field with  a season high 10 tackles  and 2 tackles for loss (Including a Sack)

There were other games where the Defensive Lineman left his mark : Against Alabama A&M, Grambling State and Prairie View A&M  he had at least 7 tackles. Steward finished this past season with at least 5 tackles in 7 of the 11 games played.