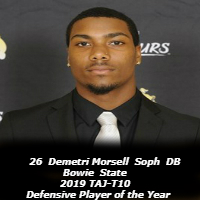 Bowie State Head Coach Damon Wilson had to know what opponents did not know when he sent his bulldog defense on the field. That is that a young man in his secondary was going to make things happen and  that  is exactly what Demetri Morsell did. Number 26 executed 9 interceptions and returned 3 of them to the house. Morsell actually gobbled up 235 yards in interception return yards. His longest return 92 yards and that’s after he snatched a pass out of the air that was not intended for him. By the way Morsell also recovered a fumble for a TD.

Demetri and the Bulldogs did not lose a game until the Division two playoffs and by that time all quarterbacks who faced the Black and Gold secondary knew they were throwing at their own risk; No thanks to the sophomore with great defensive skills  who had 5 pass break ups and a total of 14 passes defended. I must not forget to mention he also had 35 tackles and 9 of those were all by his lonesome.

DEMETRI MORSELL IS NOT HUMAN! That was a 92 yard Pick Six. I can’t keep up! pic.twitter.com/KqhV2jKaAY

The up and coming defensive back had an outstanding season. In addition to making  three trips to the house he had 3 games with 2 interceptions in each game.The Maryland native was most definitely instrumental in helping Bowie State finish the 2019 season with 11 wins against only 1 loss and ranked number Three  on The Final 2019 Urban Media Today Black College Football Poll.