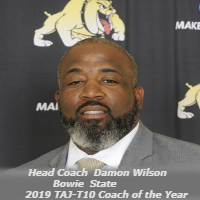 Bowie State Head Coach Damon Wilson is no stranger to a great team and awesome players. This year is the second year in a row that his Bulldogs claimed the CIAA Football Championship. Not to mention a third consecutive trip  to the NCAA D2 Championship Playoffs. The Black and Gold opened the season with a 34-20 win over American International College in Springfield Massachusetts and never looked back.

The Bulldogs beat the Yellow Jackets by by 14 points, followed by a 5 point win over Shaw 26 -21. The 21 points scored by the Bears were the most points the Bulldogs would give up for the rest of the season. Coach Wilsons Defense allowed only 15 points per game while his offense exploded for 39 points per outing. Bowie States’ Offense was as explosive as the defense was stingy. The Bulldog offense chewed up. 422 yards per game and the defense only allowed 290. What is more impressive is that BSU Amassed 5,075 yards of total offense this past season and made a trip to the end zone 56 times (28 times by land and 28 times through the air).