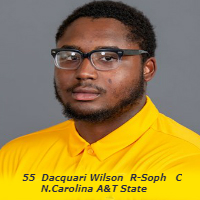 Aggie  Head Coach Sam Washington had to know that Dacquari Wilson was and is a leader. To place this Red-Shirt Sophomore at the heart of the explosive Aggie offensive attack spoke volumes this past season. Every offensive play starts with the center and when you place the responsibility of executing snaps to get an offense going on the shoulders of an underclassman that is big.

Wilson and the rest of the Aggie offensive front were key in  an offensive attack that averaged 38 points per game. Wilson was also at the center of the pass protection allowing A&T to put up 2,498 yards; Not to mention he was also one of the key blockers creating holes for a ground game that churned out 2864 yards (12th in all of FCS Football). Dacquari and the offensive front made it possible for the National Black College Champion Aggies to put up 446 yards of Total offense per game. Oh and by the way, A&T also scored 55 touchdowns.

Dacquari played 715 snaps in total this past season and executed 21 domination blocks which helped him to grade out 82 percent. Now that is impressive ,but what is even more impressive is how Mr. Wilson kept his cool and displayed his focus this past season. He only had a flag thrown against him 7 times.