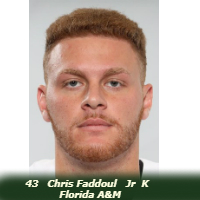 Rattlers  Head Coach Willie Simmons  had to be relieved that any time the Orange and Green had to punt the ball he had Chris Faddoul in the FAMU Arsenal.  The Rattler Punter averaged 46 yards per punt and changed field position anytime the team from Tallahassee needed.

Special teams play has been equally important to #FAMU’s success as the offense and defense. The Rattlers look to hammer down the fundamentals as they embark upon @MEACSports play. https://t.co/rrYrToXsiZ

Faddoul has been one of the most consistent punters over the past two years in NCAA Division I FCS. During his sophomore season, he led the country in punting and this season, the Wesley Chapel, Fla. native finished number two in all of FCS Football in yards per punt.

Faddoul registered 40 punts for 1,841 yards, with 19 punts placed inside the 20-yardline, with only five touchbacks. In addition, Chris  had a season-long punt of 72 yards on Oct. 20 in the 34-31  overtime win over eventual Black College National Champion  North Carolina A&T State.

The Rattler Punter was most definitely instrumental in helping  FAMU finish the 2019 season with 9 wins against only  2 losses and ranked number two on The Final 2019 Urban Media Today Black College Football Poll.