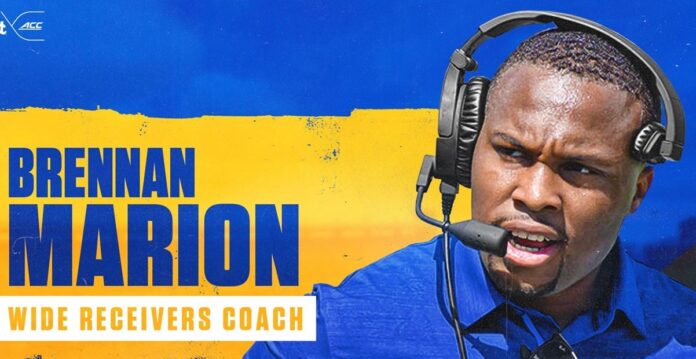 A graduate of nearby Greensburg Salem High School, Marion returns to his native Western Pennsylvania after spending the 2020 season as wide receivers coach at Hawaii. The 33-year-old Marion has coached three different positions on the offensive side of the ball and owns three years of coordinator experience.

“We went on a national search to find our new wide receivers coach and, boy, did we ever go national by finding him in Hawaii,” Narduzzi said. “We had a ton of interest in this position but Brennan Marion clearly rose to the top.

“It was important that we find a tremendous teacher and coach. Recruiting is very important, but your top priority is always having a coach who can develop his positional room. Brennan is a great hire because he truly checked every box—he’s a great teacher of wide receiver play and has outstanding recruiting ties in key geographical areas for us. He is a high-energy person who builds relationships and connects people. Brennan will be a great coach and mentor for our receivers.”

“Dreams really do come true,” Marion said. “I am extremely honored and thankful for the opportunity to return home and serve the football program at the University of Pittsburgh. Coach Narduzzi and his staff have been building something very special. I can’t wait to get back to Pittsburgh and work in our wide receivers room.”

At Hawaii, Marion oversaw the development of All-Mountain West Conference (MWC) receiver Calvin Turner, who was named the 2020 New Mexico Bowl’s Most Outstanding Offensive Player after compiling 252 all-purpose yards and scoring two touchdowns in the Rainbow Warriors’ 28-14 win over Houston. In 2019, Marion was the offensive coordinator and quarterbacks coach at William & Mary, where he dramatically improved the Tribe’s production in every major statistical category. W&M nearly doubled its scoring average while its total offensive output improved by almost 100 yards per contest.

Marion’s first Division I coaching appointment came at Howard University, where he enjoyed two exceptional seasons (2017-18) as the Bison’s offensive coordinator and quarterbacks coach. Howard boasted a highly potent offense in 2018, ranking fourth nationally in yards per completion (17.27 avg.), 15th in total yards (470.8 avg.), 16th in passing offense (278.0 avg.) and 21st in scoring offense (33.6 avg.). The Bison led the Mid-Eastern Athletic Conference (MEAC) in each of those categories as well as rushing yards per game (192.8).

The Bison had seven first-team All-MEAC performers on offense, including the league’s 2018 Offensive Player of the Year (quarterback Caylin Newton) and Rookie of the Year (running back Dedrick Parson). Wide receiver Jequez Ezzard was a BOXTOROW All-American after leading the country in yards per catch (26.3). Newton additionally was named to the HERO Sports FCS Sophomore All-America Team.

In 2017, Newton was named the MEAC Rookie of the Year after becoming the first freshman in the conference’s history to surpass 3,000 yards of total offense (3,185). Offensive lineman Gerald Wright earned All-America accolades, paving the way for a unit that ranked first in the MEAC and 13th nationally with an average of 446.0 yards per game.

Marion’s “Go-Go” offense sparked Howard to a 7-4 record in 2017, including a shocking 43-40 win at heavily favored UNLV in the opener (labeled by one observer as “the biggest upset in modern college football history”). The Bison had won just three games over the prior two years.

In 2016, Marion coached the running backs at Oklahoma Baptist University. Under his guidance, Isaiah Mallory rushed for a school-record 1,083 yards en route to first team All-National Christian College Athletic Association (NCCAA) honors. During the 2015 season, Marion was an offensive quality control assistant at Arizona State. During his college coaching career, he has earned prestigious invitations to the NFL Quarterback Coaching Summit and American Football Coaches Association’s (AFCA) 35 Under 35 Leadership Institute.

Prior to joining the collegiate ranks, Marion orchestrated two impressive turnarounds as a high school head coach. In 2014, he led Pennsylvania’s Waynesboro Area—which went 0-10 the year before—to the Mid-Penn Colonial Division title and its first winning season in 22 years. In 2013, Marion guided St. Patrick-St. Vincent (Calif.) to the North Coast Section Division IV playoffs following a 1-9 season prior to his arrival.

Marion was a record-setting receiver at Tulsa. In two seasons with the Golden Hurricane (2007-08), he compiled 2,356 yards on 82 receptions with 19 touchdowns. He was a two-time All-Conference USA selection and the 2007 C-USA Newcomer of the Year. Marion set NCAA records for yards per catch in a season (31.9 in 2007) and career (28.7). Prior to Tulsa, he was a standout at De Anza College. In 2006, he led California’s junior colleges with 1,196 receiving yards and 16 touchdowns on 60 receptions. Following his accomplished collegiate playing career, Marion signed free agent contracts with the Miami Dolphins as well as the Canadian Football League’s Montreal Alouettes.

Marion was a four-year letterman in three different sports (football, basketball and track) at Greensburg Salem. He played receiver and defensive back under Golden Lions head coach George Kermer and was an All-Keystone Conference honoree.

Marion is a 2009 graduate of Tulsa with a bachelor’s degree in organizational studies. He has two children, Mariah and Brennan.