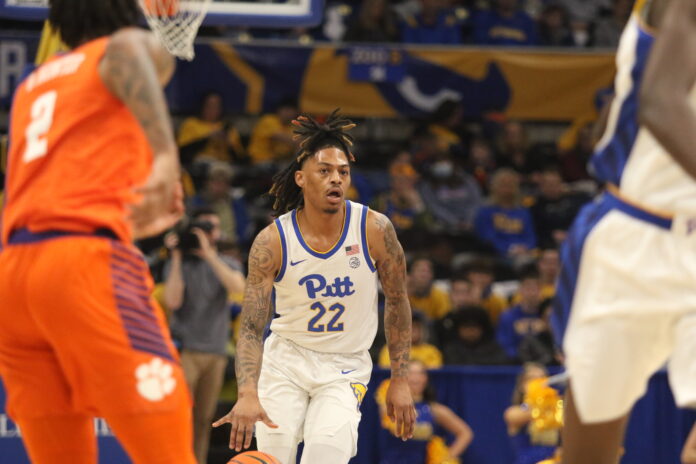 ATLANTA – Senior guard Nike Sibande scored a season-high 21 points to lead four double-figure scorers as Pitt posted a 71-60 win over Georgia Tech Saturday afternoon at McCamish Pavilion. The Panthers improved to 12-6 overall and 5-2 in the ACC with the victory.

Sibande sparked the Panthers in the opening half with 14 points, including three three-point field goals and a three-point play on a fast break layup. With starting point guard limited to seven minutes of action, Sibande went 5-of-8 from the field, including 3-of-4 from three-point range before halftime. He countered a Georgia Tech three with one of his own to give the Panthers a 32-31 lead with just under three minutes remaining.

Burton and Hinson added layups in the final 66 seconds of the half to send the Panthers into the break with a 38-34 advantage. The Yellow Jackets stayed connected with timely perimeter shooting and by attacking the offensive glass. Georgia Tech scored 12 second half points and knocked down eight three-pointers in the first half of play.

Pitt went up 10 at the 14:09 mark in the second half on a terrific finish through traffic by Sibande but Georgia Tech continued to stay within striking distance with threes by Miles Kelly and Tristan Maxwell. The hosts trimmed the deficit to four points at the under 12 media timeout but would get no closer.

Deivon Smith’s three at the 5:42 mark cut Pitt’s lead to 58-53, but Sibande had the answer with a coast-to-coast driving and-one layup to push the lead back to eight. Cummings kissed a floater off the glass late in the shot clock on the next possession and Burton made it 65-53 with a one-foot turnaround jumper at the 1:47 mark.

Pitt closed out the contest by going 6-of-7 from the foul line in the final 1:06 to secure its third ACC road win of the season.

Smith led the Yellow Jackets with 15 points and 11 rebounds, while Deebo Coleman had 13 points with 11 of them coming in the opening half. Both players made three threes as Georgia Tech finished 12-of-29 from beyond the arch.

Sibande was the first Panther off the bench for the 17th time this season. He collected his seventh double-figure scoring game and made three or more three-pointers in a game for the third time. Sibande topped the 20-point mark for the first time this season and 29th time in his career.

Sophomore Federiko Federiko had a significant impact on the game despite not putting up big numbers on the stat sheet. The 6-11 post finished with three points, seven rebounds, two steals and three blocks in 35 minutes of action. His interior defense in the second half taking away driving lanes and being active on the glass helped Pitt’s other defenders stay connected to Georgia Tech’s perimeter shooters. Pitt held the Yellow Jackets to four second half threes, half of what they hit in the opening 20 minutes.

LITTLE TO NO TOs

Pitt had a season-low three turnovers in the game and posted an 8-0 advantage in points off turnovers.