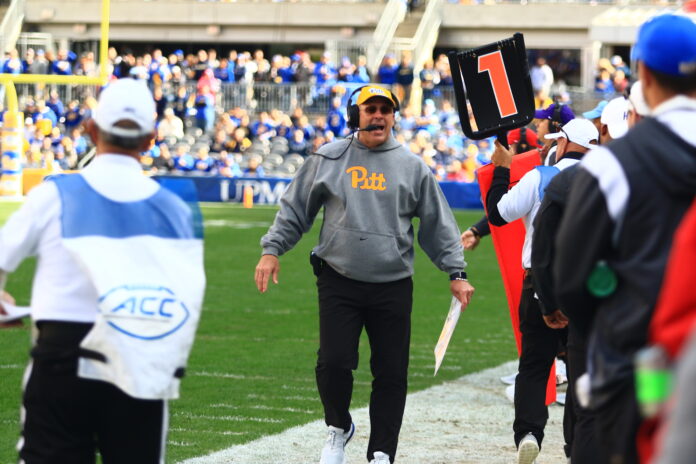 ​​​​​MIAMI, FL—The final week of Divisional Play in the Atlantic Coast Conference (ACC) will be a memorable one for the Pitt Panthers as they not only finished on a 4-game winning streak (and undefeated in November), but they did the one thing that they haven’t done in several years: They beat the Miami Hurricanes.

And what made this 42-16 rout of Miami even more special, was that it was done at Hard Rock Stadium in Miami—a city that they haven’t won in since 2014. And they did so with the type of performance that made them ACC Champions a year ago.

“This was a long time coming, besting Miami,” said Pitt head coach Pat Narduzzi. “You know, last year with the almost safety. It feels great to put the game together.”

QB Kedon Slovis (18/28, 256 yards, 3 TD, INT) played his best game as he led the Panthers to a 28-0 halftime lead. He showed the command and confidence that had been expected of him when he transferred from USC a year ago.

But the player of the game was WR Jared Wayne as he was tremendous as he caught 11 passes for 199 yards and 3 TDs-including a 66-yard score. RB Israel Abanikanda also added to his special season by rushing for 111 yards and 2 TDs. Backup C’Bo Flemister added 89 and a TD and Rodney Hammond added 56 as Pitt rushed for 248 yards as a team.

Wayne also eclipsed 1,000 yards for the season. When asked about his performance he replied, “It’s still not a perfect game, but it’s a glimpse of it, what I can do.”

The Pitt defense also performed admirably as they sacked Miami QBs 6 times and intercepted them twice.

The Panthers (8-4, 5-3 ACC) will now await their Bowl destination when those games will be announced December 4th.

Notes: On Friday, Pitt basket used a dominant second half performance en route to an 80-64 win over William & Mary Friday evening at the Petersen Events Center. The Panthers overcame a four-point halftime deficit and outscored the Tribe 47-27 over the final 20 minutes of play.

Blake Hinson recorded his second double-double with 17 points and 11 rebounds, while Nike Sibande came off the bench to deliver 15 points, nine rebounds, four assists, two steals and a blocked shot. Pitt also got efficient double-figure scoring efforts from John Hugley IV (16) and Jamarius Burton (16) as the tandem combined to go 11-of-19 from the field.