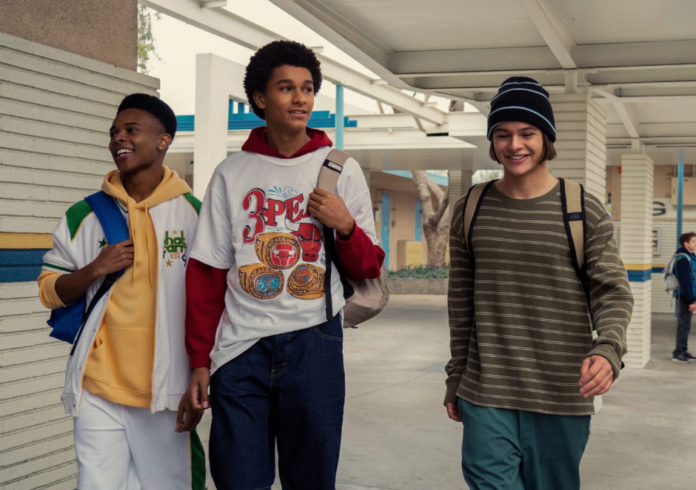 After months of anticipation, Netflix has officially dropped the trailer for Colin in Black and White, their new series on the life of Colin Kaepernick.

This limited series co-created by TV and film titan Ava DuVernay has been teasing its release all year, from exclusive photos to brief clips, as theGrio previously reported. Now, with the series officially premiering later this month, Colin in Black and White has given its most in-depth first look yet, with Kaepernick narrating his own upbringing and high school days in the first official trailer.

“Since the day I was born, my passion, my love was being a quarterback. But what you start out as is not necessarily what you become,” Kaepernick says at the start of the clip. The trailer then gives fans a sneak peek at Jaden Michael as Young Colin, as well as Nick Offerman and Mary-Louise Parker as his parents.

Accompanying the exciting trailer is a blog post co-authored by Kaepernick and DuVernay discussing the series, how it came to life and what they hope audiences will take away from the show.

Kaepernick shared in the post, “Colin in Black and White is a scripted limited series inspired by my experience as a Black child, adopted by a white family. I did not have a lot of references or guides growing up to help me navigate some of the negative experiences or interactions I went through as a young Black kid. When we were thinking about telling this story, we wanted to explore that idea more and give people references of how these situations can impact and shape one’s identity and growth.”

“I hope people feel compelled to examine their own origin story,” DuVernay shared. “How did I get here? What things happened – small and large, remembered and forgotten – that led me to this place now? This series is about deciding for yourself what your life and legacy will be. It’s about self-determination, self-propulsion, not waiting for permission, not waiting for everyone to agree, tapping into the voice inside of you and letting that spur you forward. And it’s about knowing that within your individual story, you are also a part of something larger.”

She added, “My highest hope is that some viewers will walk away with some of these thoughts and questions.”

Colin in Black and White premieres on Netflix on Oct. 29. Check out the official series synopsis below:

From co-creators Ava DuVernay and Colin Kaepernick comes Colin in Black & White, a bold new limited series that chronicles Kaepernick’s coming of age story, tackling the obstacles of race, class, and culture as the Black adopted child of a white family. Colin in Black & White stars Jaden Michael as Young Colin before reaching the highest levels of American football as an NFL quarterback and becoming a cultural icon and activist.

Nick Offerman and Mary-Louise Parker as his well-meaning parents Rick and Teresa; and Colin Kaepernick himself, who appears as the present-day narrator of his own story, guiding viewers through a robust and colorfully presented array of historical and contemporary contextual moments. You don’t know Kaepernick until you know Colin.