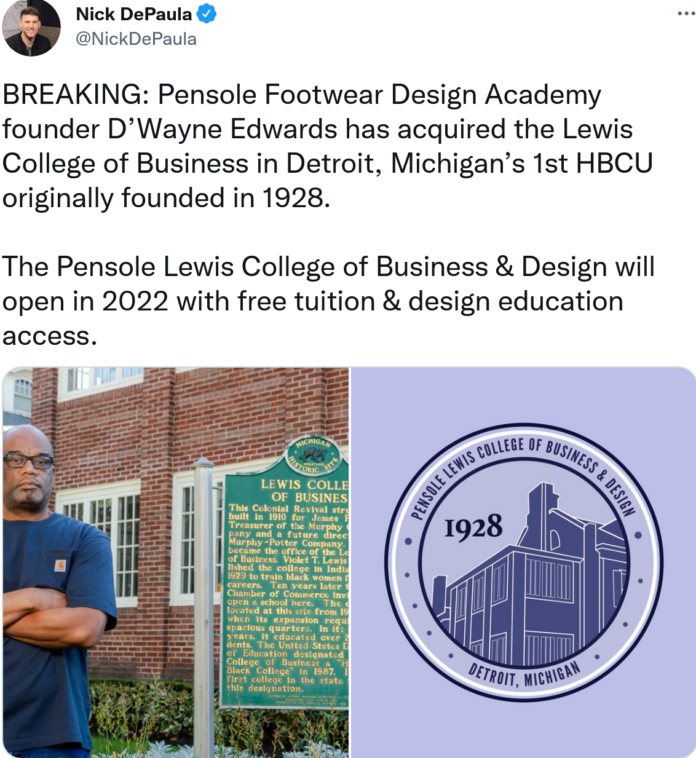 A Portland footwear designer is leading the effort to reopen the only historically Black college in Michigan.

The City of Detroit announced this week that the Lewis College of Business is set to reopen for students in 2022, Click On Detroit reports. The HBCU was founded in 1928 and closed its doors in 2013. It will be reopened by prominent business owner Dr. D’Wayne Edwards, the founder of the PENSOLE Design Academy in Portland, Ore.

Edwards, who has designed shoes for brands like Asics, New Balance, Nike and Air Jordan, has the support of Detroit Mayor Mike Duggan, Cleveland Cavaliers owner Dan Gilbert and the Gilbert Family Foundation.

“The Pensole Lewis College of Business and Design is an institution that will cultivate a diverse pipeline of talent ready for jobs of the future while creating equitable access to opportunities for our city’s residents,” Jennifer Gilbert said Tuesday.

After approval from the Michigan Department of Education, Edwards wants to start class on March 13, or “Detroit Day,” so named for the city’s area code 313. The state legislature also has to approve PLC’s request to be acknowledged as an HBCU in Michigan. The PENSOLE college would be “majority tuition-free,” Edwards said. Corporations will sponsor students and their housing, according to Click on Detroit.

“As a predominantly Black city, Detroit should have an operating Historically Black College,” Duggan said. “Not having one has been a hole in our educational landscape for too long. To have the first HBCU anywhere to reopen happen in Detroit would be a tremendous demonstration of how our city is coming back as a city of opportunity for people of color.”

The Lewis College of Business was founded in 1928 by Violet T. Lewis in Indiana before she relocated to Detroit and opened a school there in 1939. She eventually closed the Indiana location to put more of her focus on the institute in Detroit. For nearly 75 years, the institution served as a secretarial school for Black women.

“82 years later, and 14 years since it lost its accreditation as HBCU, I am honored to be resurrecting Violet T. Lewis’s legacy in Detroit,” Edwards said in a press release.

“As a Black male in the ’80s growing up in Inglewood, the probability of me being dead or in jail was higher than me getting a corporate job,” Edwards told The Detroit News. “A program like the one at PLC could have saved a lot of people. My hope is, it’s gonna save a lot of people still to this day.”

“They (students) will have an education that is meaningful and that definitely results in employment. That’s what my grandmother was all about,” said Lewis’ granddaughter, Dr. Violet E. Ponders.

“You feel this wind blowing in this place? You see the apples falling on the tree? All of that I think is her way and my mother’s way of saying, ‘I’m here y’all,’” she said.

“The first session will be will be a celebration of Detroit brands,” Edwards said. “I think it’s important for us to understand our history before we start to bring other people to the party. So we want to ground everything that we do initially into Detroit, and then we’ll start bringing our other partners that are from other parts of the country to Detroit.”

When it comes to the enrollment process, Edwards said it’s all about the quality of students, not the quantity.