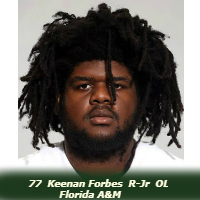 Head Coach Willie Simmons  had to be all smiles when he looked at his offensive lineman Keenan Forbes. The 6’3″  Red-Shirt Junior was an intricate part of an offense line that yielded a MEAC low  8 sacks in 11 games. What makes that stat more impressive is that the Rattlers air attack executed 406 passing plays and 291 yards passing per contest.

Forbes and the rest of the Rattlers offensive front powered an  attack that averaged 32 points per game. The Rattlers offensive line was also at the center of the pass protection allowing FAMU to put up 3,202 yards; Not to mention he was also one of the key blockers creating holes for a ground game that churned out 1164 yards. Keenan and the FAMU big bodies made it possible for coach Simmons’ offense to put up 396 yards of Total offense per game. Oh and by the way the Rattlers made  45 visits to the house (Touchdowns).

The Rattler Lineman was most definitely instrumental in helping  FAMU finish the 2019 season with 9 wins against only  2 losses and ranked number two on The Final 2019 Urban Media Today Black College Football Poll.