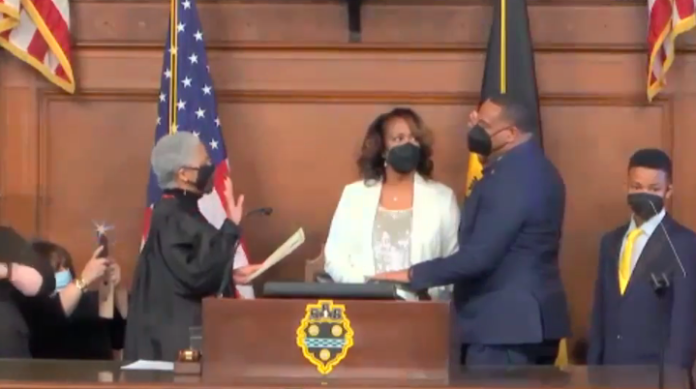 Most inaugural events are moments in history, but some are more significant than others.

On Monday, January 3, 2022, Pittsburgh history was forever marked by the inauguration of its first Black Mayor, Ed Gainey.

Gainey, who previously served as Pennsylvania State Representative for the 24th District in and around Pittsburgh, Gainey challenged incumbent Mayor Bill Peduto in the May Primary for the Democratic nomination, then taking his success further by defeating Republican challenger Tony Moreno in November’s General Election.

Gainey’s swearing-in, held virtually due to Covid-19 concerns, was broadcast live both online and on Pittsburgh’s City Channel from Pittsburgh’s City Council Chambers. In attendance were City, County and State officials, welcomed by emcee Natalie Bencivenga, who emphasized Gainey’s concern for keeping the people of Pittsburgh safe.

Following Presentation of Colors by Three Rivers Battalion Army ROTC as the National Anthem was performed a capella by Pittsburgh native Erica Perri, attendees were treated to an off-site drum and dance performance by Sankofa Village for the Arts, located in Gainey’s home neighborhood of Homewood.

Pastor Michael H. Smith, of Destiny International Ministries, a lifelong friend of Gainey’s, took time during his invocation to speak to the historic nature of Pittsburgh electing a Black man to lead the City, encouraging the new Mayor to remember the Biblical story of Esther, who courageously faced adversity in the belief she was doing God’s will, praying Gainey be blessed with insight and wisdom.

Mount Ararat Baptist Church Praise and Worship Ensemble sang “Lift Every Voice and Sing,” often referred to as the Black National Anthem, followed by a Proclamation from the Pittsburgh Public School Board presented by District 2 Representative Devin Taliaferro, First Vice-President of the Board, honoring Gainey with the day in his honor in acknowledgement of his graduation from Pittsburgh Public Schools’ Peabody High School.

“This moment signifies hope that our district can build a bridge toward a stronger partnership with the City of Pittsburgh, as we seek to leave a legacy for the children of the City of Pittsburgh to be proud of, and carry on for decades to come,” Taliaferro said. Future Pittsburgh CAPA graduate, Senior vocal major Francesca Rose then sang Andra Day’s “Rise Up.”

Offering remarks remotely, Governor Tom Wolf spoke of Gainey’s tenure as Representative as demonstrative of what he might accomplish as Mayor.

“I’ve known Ed for many years. He was a long-time distinguished member of the State House of Representatives, and I know him as a very strong leader who has, time and time again, demonstrated his immense strength of character and his determination to lift up people of this community,” says Wolf. “As Mayor, he is going to use the full force of his determination, his strength and his dedication to put the people of Pittsburgh first.”

“Pittsburgh is a place where people already do great things; Pittsburgh has proven itself to be an amazing City,” Wolf says. “Mayor Gainey’s focus on improving opportunity for everybody is going to put Pittsburgh on a path to even greater things. Our Commonwealth relies on the strength of Pittsburgh and the people who live there. Under Mayor Gainey’s leadership, Pittsburgh can look forward to an even greater future.”

Allegheny County Executive Rich Fitzgerald says, “Pittsburgh is a special place, it’s a place that we all love, and no one demonstrates that love more than Ed Gainey. He is going to continue to move this City forward in a big way.”

“But the one part of the City that he’s really been talking about, that I think all of us have as a challenge, is the word ‘equity’ we keep hearing,” Fitzgerald said. “Because for all of the great things that are happening in a great part of this City, not everybody has that hope, not everybody has that ability and that connection to the opportunities we’re having. Ed Gainey has made that a major priority. This is going to be a City in which people who have been left behind are going to have that hope, that this City and those opportunities are for them, and for that we owe a great debt of gratitude for the things Ed is going to do.”

Local artist and poet Vanessa German presented a poem called “The Human Heart” written by her specifically for the occasion.

“Justice begins in the human heart,” she opened. “The human heart is the first room of truth.” Her message in verse expressed the hope that Pittsburgh would be a “City of heart,” unified and whole in a search for justice for all.

Fifth Judicial District President Judge Kim Berkeley-Clark, herself the first Black woman to serve in that capacity in Allegheny County, offered some advice in return for “the privilege of me being here today.”

“Remember to exercise good temperament and be empathetic, patient, and above all, kind,” says Berkeley-Clark. “It takes very little effort to be kind, but it has a huge effect on the behaviors of others.”

“Finally,” Berkeley-Clark said, “Work hard. Never expect others to work harder than you do. You will be called upon to make difficult decisions. Make the decisions wisely and decisively. You won’t be able to please everybody, but make sure you follow your conscience.”

And then, at 1:50 pm, Ed Gainey placed his left hand on a Bible held by his wife Michelle and took the oath of office as administered by Berkeley-Clark, to become the 61st Mayor of the City of Pittsburgh.

Gainey then enthusiastically thanked his supporters and local officials, including the three former Mayors Tom Murphy, Luke Ravenstahl and Bill Peduto in attendance, with special emphasis on his family members, wife Michelle Coburn Gainey, daughters, Mariah and Alexa, and son Darius as well as his mother, Darlene Gainey-Craig, his father, and his late step-father, Fred Craig.

“I want to thank each and every one of you for putting your faith in my leadership,” Gainey said. “I love this City, for without this City I wouldn’t be who I am today. I want you to know that I will never take your support, or vote, for granted. I understand that your trust, and your confidence, is not a permanent condition, but something that must be earned and protected every single day.”

“The experience I’ve gained throughout my career in public service has prepared the path that has led me here today,” said Gainey. “For me, today isn’t just a celebration, it is an appreciation of you and our City.”

“I am here today as a physical manifestation of a labor of love. I stand here because of people whose names I don’t even know, who struggled for me, who fought for me, who sweated for me and who volunteered for me.”

“When I returned to Pittsburgh after graduating from Morgan State, I was determined to put in the necessary work to build bridges across neighborhoods, and throughout this City,” Gainey says. “Through my work in community development, I came to realize that many of us forget the power we have right now. We have a choice in every moment, and if we just look around, we have a choice to accept things as they are, or to take responsibility for changing them. And, as I heard the stories of families across Pittsburgh, I came to understand, and believe, that we cannot forget that our real power is not necessarily to change the world. It is to make a world of change in the people we encounter every single day.”

“My promise to you is that we will work to make Pittsburgh the Pittsburgh you voted for,” says Gainey. “A City where economic opportunity is abundant for everybody. A City where affordability isn’t a luxury. A City that is prepared to lead into the future. Our City’s leadership will be a direct reflection of the people we serve.”

“While Pittsburgh is a leader in many areas, including health care, technology, and our university systems, under my leadership, under my administration, we will work to ensure that Pittsburgh is also a leader in police-community relations, economic inclusion, affordability, transportation access, and that we partner with our schools to create a world-class education system that benefits everyone,” Gainey says. “We are going to support and enhance our City’s economic development efforts to continue to ensure the growth of strong job creation. We will ensure that Pittsburgh is a leader in transportation by investing in projects in conjunction with our Port Authority and our great County Executive, Rich Fitzgerald.”

“We will build the foundation for the next generation of Pittsburghers by establishing policies that create sustained investments in literacy, career and workforce development, civic infrastructure and housing options,” Gainey says. “We have work to do, Pittsburgh.”

“It is with immense optimism that I stand here, optimism that we, together, can meet the challenges that we face, to overcome what divides us, and to make this a great City for all.”       “I can’t do it alone,” Gainey says. “I’m asking you to join me on this journey. Success does continue to live here, and thrive here in our City of Pittsburgh, but not at the expense of those who have been left behind for far too long. Let me be clear: We will be bold, we will aim high, and we will work tirelessly until we get there.”

Emphasizing his message of “a City for all,” Gainey says, “I intend to represent every resident of this City: Not only the ones who voted for me, but [also] the ones who didn’t vote for me. We are one City. We are one Pittsburgh.”

“When I decided to run for Mayor, I didn’t decide to run for Mayor to make history. I decided to run for Mayor to make change,” says Gainey. “But I would be remiss if I didn’t reflect on the historical significance of today. Being the first Black Mayor to hold this seat is not a responsibility I take lightly. I realize I stand on the shoulders of ‘greats’: Harvey Adams, Alma Speed Fox, Nate Smith, Byrd Brown, Doc Fielder, Bubby Hairston, and the Ward Chair we lost last year, Chuck Frazier. I understand that my victory represents another step forward, in advancing the vision of our country, that all people have access to opportunity. That is the American way.”

“When we come together, we have done amazing things — in the past, in the present, and into the future,” says Gainey. “The time is now, because we will set the course for the next generation. The children who are watching this today, I want you to know that you can dream to be whatever you want to be. I want you to cross all types of lines: racial lines, economic lines, gender lines. Get to know everybody. Build relationships that will build your knowledge, build your strengths, build your capacity, so that you can lead in the future, so the next generation is always ready to go.”

“That is our responsibility, right here and now, to work together to make a Pittsburgh for everybody, so the next generation can say, ‘we live in the Greatest City in America,’ but it won’t be a slogan, it will be for real.”

“Pittsburgh! Let’s go get it!”