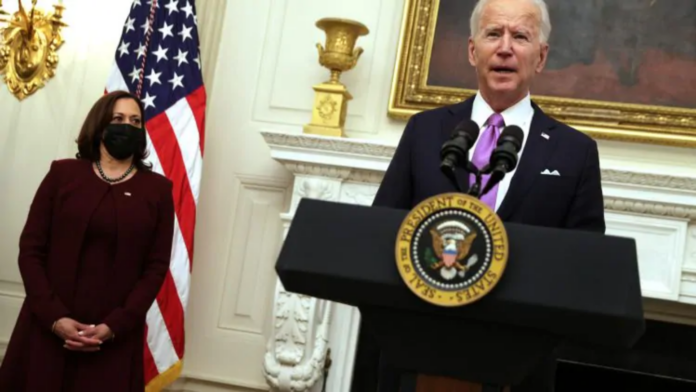 “Science is back,” declared President Joe Biden as he and Vice President Kamala Harris visited the Centers for Disease Control headquarters in Atlanta on Friday. This is one of the stops Biden made while in the city responding to a shooting that occurred this week and targeted Asian Americans.

While at the facility, President Biden acknowledged there is a huge disparity in the Black community versus white America when it comes to COVID-19. At the CDC headquarters, Biden acknowledged tracking for minority communities and the underserved during the pandemic was non-existent under the Trump administration, and now that crucial data tracking is available.

Mayor Keisha Lance Bottoms has signaled her city needed intervention from the federal government to manage the pandemic. Earlier in February, Bottoms and mayors from across the country met with Biden to discuss the American Rescue Plan. Now, the president is on her turf to follow up on issues she raised last month regarding tracking in Black communities.

Currently, the numbers are 15 million for full vaccinations for white Americans versus 1.49 million for Blacks Americans. Much of the low vaccination numbers for the Black community are chalked up to fear and skepticism tied to historical disparities in the medical community.

But Democratic pollster, Cornell Belcher, recently conducted a poll commissioned by the National Urban League, which sheds a new light on Black hesitancy in vaccinations. He found that most Blacks are not getting the vaccination due to lack of information. However, Belcher calls the stark difference in vaccination numbers part of “structural racism in the medical industry.”

The CDC has recently announced it will be rewarding $2.25 billion to address COVID-19 health disparities and communities at high risk for infection and severe illness. This is an attempt to achieve health equity in the midst of the pandemic. Faith leaders and advocates have been actively trying to fill the gap on educating the Black community on the vaccine and how to access it.

Biden and Harris’ visit comes as CDC officials are warning of a new surge in the deadly variant that is more severe in its impact on the human body. When theGrio’s April Ryan asked about the variant’s impact on school-aged children, Dr. Anthony Fauci of the NIH noted, “the likelihood is a child getting infected with this variant is greater.”

However, Fauci also said the variant overall has an increased severity and increased transmissibility among the general population as well. This update comes just as the CDC is relaxing the guidelines for social distancing in K-12 schools to three feet apart instead of the six feet originally advised throughout the duration of the pandemic. The CDC continues to support layering strategies such as wearing a mask and social distancing.

Dr. Dan Levy, a fellow of the American Academy of Pediatrics says air quality is a big issue with the schools reopening. “This an airborne disease …. the issue is to circulate fresh air into the classroom and to try to have the air pass through a sterilization device,” he said. “It is some way to minimize the spread of the virus through the air.”