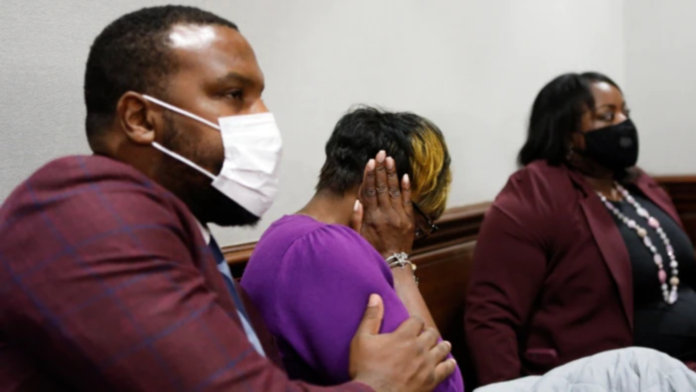 The family of Ahmaud Arbery — who was murdered by Travis McMichael and his father, Gregory — is reportedly devastated by the federal plea agreement reached this week for the two men. Their accomplice, William “Roddie” Bryan, was not mentioned in the court documents, according to CNN.

The plea deal on federal hate crime charges means the McMichaels will serve the first 30 years of their life sentences in federal prison, which will afford them safer, less crowded detention conditions.

“Federal prison is a country club when compared to state prison,” family attorney Lee Merritt tweeted. “Federal prisons are less populated, better funded and generally more accommodating than state prisons. These men hurriedly entered this plea deal that would allow them to transfer out of custody from GA prison.”

“By admitting they were motivated by hate when they hunted & murdered Ahmaud Arbery these men get to transfer to safer, less crowded & more orderly federal detention facilities,” Merritt shared. “In essence, they get to publicly brag about their hatred & then be rewarded by the federal government.”

The men’s federal trial was scheduled to begin on Feb. 7.

Wanda Cooper Jones, Arbery’s mother, is reportedly devastated by the new sentence, per CNN. She had previously opposed a plea agreement with the government before the state convictions.

In a statement, Arbery’s family wrote, in part, that “the proposed plea is a huge accommodation to the men who hunted down and murdered Ahmaud Arbery. The family is devastated at this development, their wishes are being completely ignored and they do not consent to these accommodations.” Cooper Jones herself added: “The DOJ has gone behind my back to offer the men who murdered my son a deal to make their time in prison easier for them to serve. I have made it clear at every possible moment that I do not agree to offer these men a plea deal of any kind. I have been completely betrayed by the DOJ lawyers.”

Merritt noted in a tweet “The Crime Victims’ Right Act 18 USC § 3771 (a)3 guarantees ‘the right to be reasonably heard at any public proceeding involving a plea offer…’ Wanda Cooper Jones will assert her opposition to this plea offer in open court as she is legally entitled.”

Merritt said the federal government was, to Arbery’s kin, essentially “snatching defeat from the jaws of victory.”