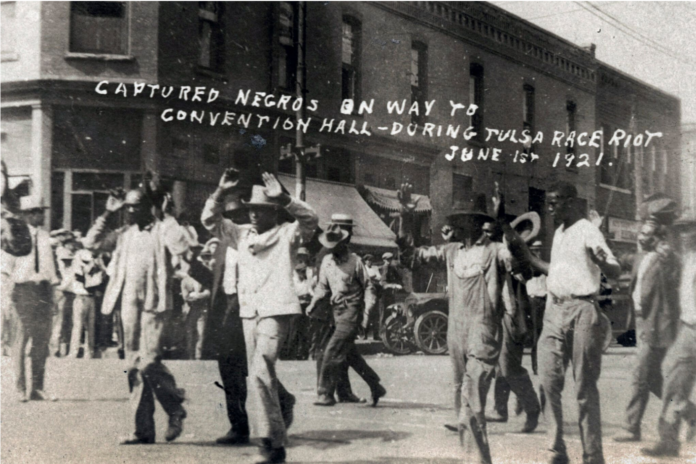 A century later, the issue is still not settled on the massacre of the wealthy Black Greenwood district in Tulsa, Oklahoma. One hundred years ago, Black families in Tulsa were denied financial restitution from insurance companies after the massacre that occurred between May 31 and June 1, 1921. Ironically, some of the same insurers that denied those claims are still economically thriving today from that decision.

“We know what was taken,” said Damario Solomon-Simmons, the lead attorney for the last living survivors of the Tulsa Race Massacre. “We also know some of the insurance companies that are still active today.”

NAACP President Derrick Johnson contends this is an example of how Corporate America participates in structural racism.

In the midst of a new push for racial equity, 100 years after the displacement of 10,000 people and destruction of 35 blocks of the affluent Black enclave, President Joe Biden will travel to Greenwood on Tuesday. According to Biden Senior Advisor, Cedric Richmond, the administration is “recognizing the moment and we hope to meet the moment.”

Richmond, who also heads the White House Office of Public Engagement, said the president will connect his “racial equity agenda” and the “economy” to the visit.

President Biden plans to meet with the remaining three living survivors of the Tulsa Race Massacre who are now centenarians. The survivors were children at the time of the massacre. Another portion of the president’s trip to the historic area is to visit the Greenwood Cultural Center.

President Biden is expected to tell the story of the town and then of its downfall. Richmond underscored “it is a story in this country most people don’t know.”

As the story goes, a Black man and white woman were in an integrated elevator in a building. The white woman screamed for no apparent reason except for fear of a Black man. The scream began a chain of events that ended in death and the destruction of a town that was both the hope and dream of the slave of yesterday and the people of today. The state of Oklahoma created a commission on how to move forward with what happened in the Greenwood district. Action, however, has yet to be taken.

Now Congress is stepping in. Congresswoman Sheila Jackson Lee held a hearing on the matter where Georgia Congressman Hank Johnson stepped up by proposing to take on another legacy piece of legislation initially introduced by former Congressman John Conyers Jr.

Congressman Johnson has proposed the Tulsa Greenwood Race Massacre Accountability Act. He said it ”will bring some measure of accountability, and perhaps even compensation for the losses that those victims and their heirs suffered as a result of this state-sanctioned violence.”

The legislation seeks to redress the denied insurance claims and lost funds that banks held after the massacre.

Johnson contends “the complicity of the state and the city in finding that it was a race riot” was a maneuver to block the survivors from recompense.

“All of those cases were dismissed and so the people never did get their just compensation in the courts of law,” Johnson tells theGrio.

Johnson is working on finding someone in the Senate to create a compassion bill to his measure in the House. Congresswoman Jackson Lee, who sits on the House Judiciary Committee, said the conversations about repairing what happened in Tulsa are underway.

“We’re talking also about reparations right now when it comes to Tulsa, Oklahoma, and the 100th anniversary of the massacre there, Black Wall Street, the destruction of a viable, economically viable, self-sustaining Black community that was broken up because of racism,” the Texas Congresswoman tells theGrio.

Congresswoman Jackson Lee also highlighted that reparations is an international term and for that reason, Congress is working with organizations that focus on the international human rights aspect of the Tulsa Race Massacre, such as the Human Rights Watch.

theGrio spoke exclusively to Congressman Gregory Meeks, chair of the House Foreign Affairs Committee, who also contends many of these race issues are human rights issues. As a representative of the United States on the international stage, he makes it a point to talk with other countries about their human rights problems and account his own experiences as a Black man in the United States.

”I say to them before they even have a chance, I’m not coming here to tell you that America is superior to you. I’m telling you that we are trying to fix our problems in America still to this day,” Meeks explained.

“And the right thing for you to do is when you to start doing the same thing, and I can’t sit back knowing the injustices that I have suffered … [and] allow that to continue someplace else …. and not speaking up about it.”

Poverty, racism and the public health crisis in America