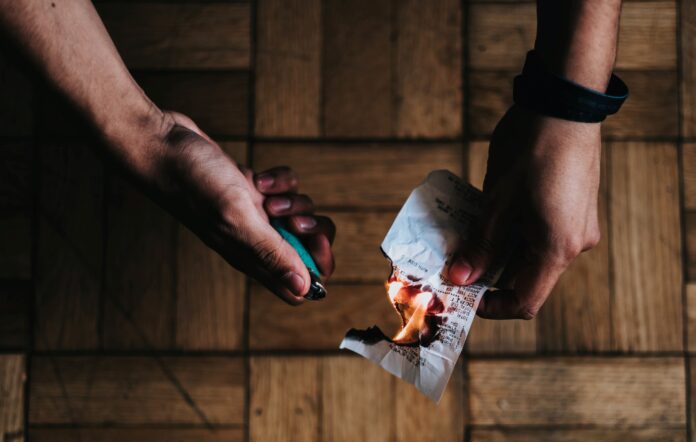 When Sean* was 15 years old, he set his high school on fire.

It wasn’t an accident. He was angry that he didn’t get good grades, that he didn’t feel like he fit in, that he was picked on. But he didn’t talk to anyone about his emotions — and eventually they came out in a destructive way.

Sean caused more than $700,000 worth of property damage and was convicted of four felonies. He spent several years in prison. Yet, after signing up for counseling and participating in the University of Michigan Trauma Burn Center’s Straight Talk program, which has taught youth about the consequences of misusing fire for more than 20 years, he was able to change his behavior, improve his relationships with his family and even start his own business.

“You’re faced with a choice after the fact,” Sean said in a recent interview with Michigan Health. “You can either accept that you did it, learn something from it and get better, or you can keep more of a victim mentality. It was really helpful in Straight Talk to see that you don’t have to keep that latter mindset — you can move forward and change life, and here’s a bunch of people who want to help you do that.”

Sean is one of many kids who has misused fire, whether it’s motivated by curiosity or crisis.

The National Fire Protection Association estimates that children playing with fire caused an average of 8,100 fires in American structures — including homes, schools and other buildings — each year between 2014 and 2018. And arson is the criminal act with the largest proportion of juvenile arrests in the United States; on average, 50% have been younger than 18 years old.

The added pressures of the pandemic may have pushed these numbers even higher: The U-M Straight Talk program has seen an increase in referrals for youth firesetting over the past year and a half.

“This might be related to associated family, community and financial stressors that the pandemic has caused,” said Karla Klas, R.N., the managing director for injury and violence prevention and community outreach for the U-M Trauma Burn Center. “We know people have been struggling, and this definitely affects the children, too.”

Klas has taken it upon herself to spread awareness of this issue by partnering with the state’s Fire Marshal Office and the MI Prevention Statewide Community Risk Reduction Coalition to proclaim August Michigan’s first Youth Firesetting Prevention Month — one of the first steps in creating a statewide initiative dedicated to this topic.

“Youth firesetting is a high-risk behavior that greatly impacts the community and school safety,” Klas said. “Through research and experience, we know that without appropriate intervention, or, importantly, if only punishment is used, youth who misuse fire are likely to do it again.

“The good news is that we can make a difference and keep youth firesetting from happening through prevention, early identification and supportive education,” she said, “and get youth like Sean the help that they need to thrive.”

All children are at risk for using fire unsafely. Follow these tips, which Klas compiled for the National Fire Prevention Association, to keep dangerous items away from kids and help them understand the risks of fire.

If you have a child between the ages of eight and 17 who has played with matches or lighters; used accelerants, fireworks or bottle bombs; or committed arson, you can refer them to the Straight Talk program using this form.

Youth who have observed other kids playing with fire or who have a heightened interest in fire are also eligible. Please contact the U-M Trauma and Burn Center for additional options if your child is younger than eight and has misused fire.

The Straight Talk program is a free, one-day class every other month. (During the pandemic, the class has moved online, and staff continue to evaluate when it will be safe to return to an in-person format.)

Everyone from firefighters and social workers to arson police and burn survivors join together to teach youth who misuse fire about the medical, social, legal and financial consequences of their actions using interactive techniques that promote a safe environment and prevent injuries. Sean has been a regular speaker as well.

*For privacy, only Sean’s first name was used for this story.