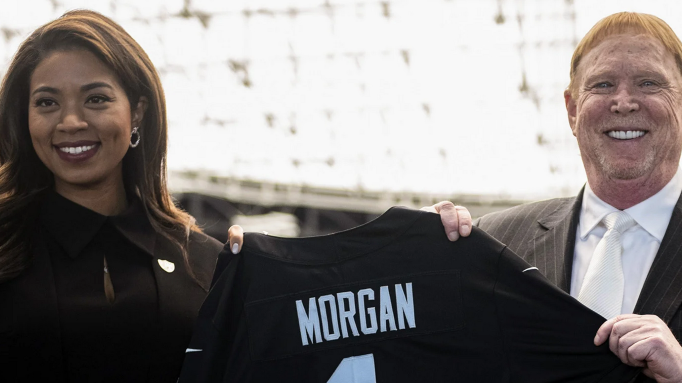 In the National Football League’s 102-year history, never before has a Black woman served as president of a franchise.

That is until Sandra Douglass Morgan was picked to assume the esteemed role in the Las Vegas Raiders organization last week.

The Raiders on Thursday announced that Morgan, an attorney and native of Las Vegas, will be team president, as reported by NPR. The team relocated from Oakland, Calif. in 2020.

“It is the honor of a lifetime to join the Raiders at one of the most defining times in the team’s history,” Morgan said during a press conference on Thursday. “This team’s arrival in Las Vegas has created a new energy and opportunities we never dreamed possible.

“I look forward to taking this team’s integrity, spirit and commitment to excellence on the field into every facet of this organization.”

The Raiders’ short tenure in Sin City has seen its fair share of challenges thus far, including the resignation of former head coach Jon Gruden last year. Gruden stepped down after emails, in which he used racist language regarding DeMaurice Smith, the head of the NFL Player’s Association, surfaced. The emails in question were sent more than a decade ago.

“We have so much more to do, and I’m excited to be at the helm of that growth and look forward to ushering in the new chapter for the Raiders,” Morgan said, according to ESPN.

“The Las Vegas connection was not a criteria, but it was something that was on the positive side of the ledger,” said Mark Davis, owner of the Raiders. “Obviously, somebody that knows this community, knows the people in it, I think is very important for us to continue to build out foundation in Las Vegas.”

In addition to making history as the NFL’s first Black woman team president, Morgan is also the state of Nevada’s first-ever African-American city attorney, as well as the first person of color to chair the state’s Gaming Control Board, the outlet reported.

“I definitely never want to be the last,” Morgan said during the press conference, per ESPN. “and I want to get to a point where there is no more firsts.”