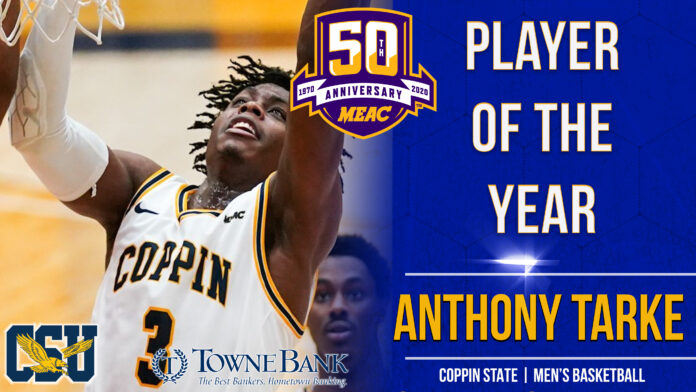 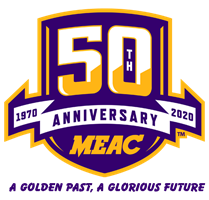 NORFOLK, Va., March 5, 2021 – Coppin State redshirt senior guard Anthony Tarke has been named the 2020-21 Mid-Eastern Athletic Conference (MEAC) Player of the Year and the Defensive Player of the Year, while brother Nendah Tarke is the Rookie of the Year. This is a first in MEAC history where brothers have swept the conference honors. Florida A&M head coach Robert McCullum has been selected as the MEAC Coach of the Year. 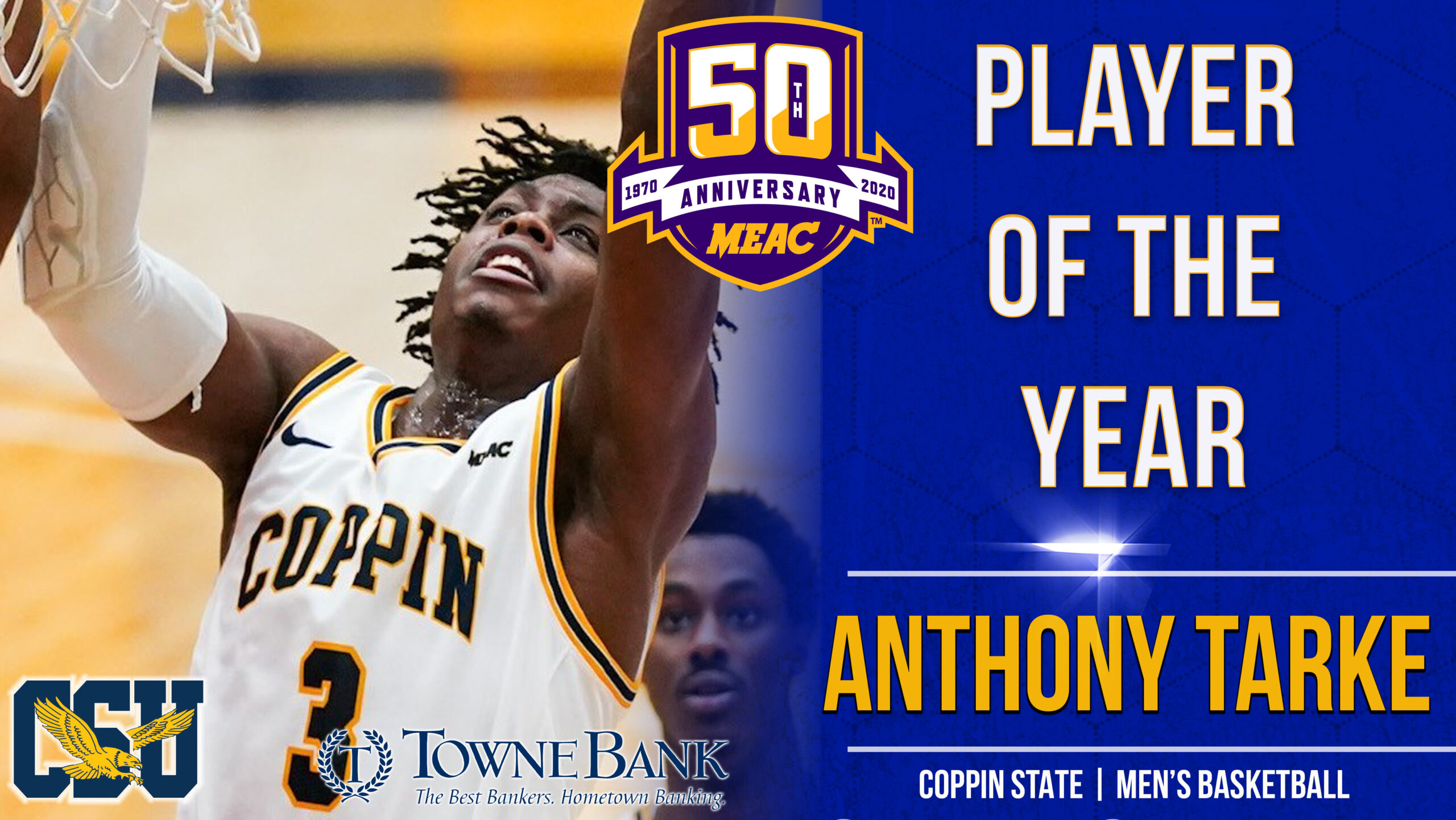 A 6-foot-6 redshirt senior from Gaithersburg, Md., Anthony Tarke is a nominee for the Lou Henson Award, which honors the top mid-major player in the nation. Tarke led the Eagles in virtually every statistical category and tops the MEAC in total points (345), rebounding (8.4), double-doubles (eight), defensive rebounds (6.7), blocks (1.9), steals (56), free throws made (87) and free throw attempts (155). The only player in the nation to average at least 16 points, eight rebounds, three assists and two steals per game, Tarke also ranks third in the MEAC in points per game (16.4) and assists (78), and seventh in field goal percentage (47.4) and assist/turnover ratio (1.1). 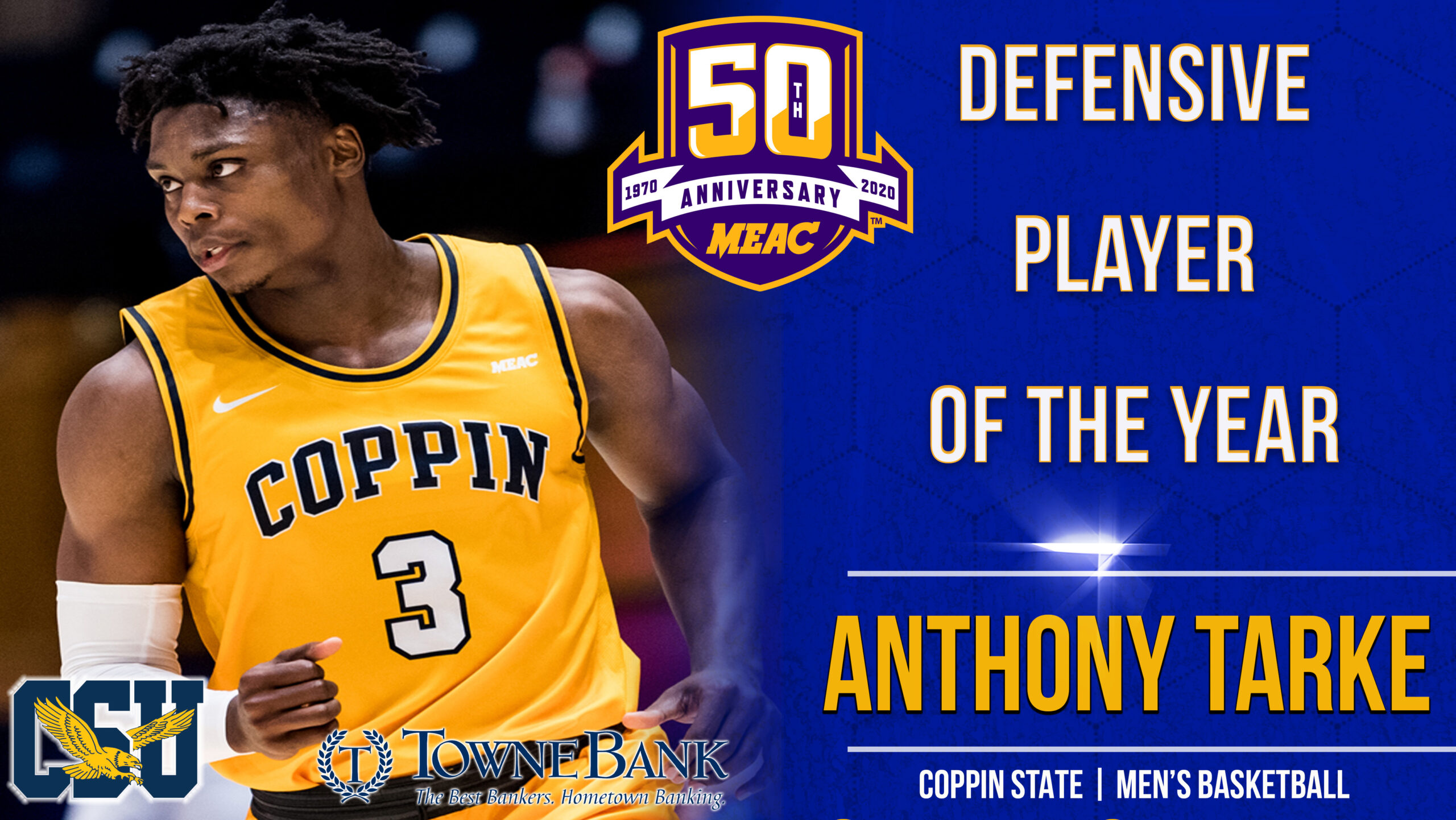 Receiving eight MEAC Defensive Player of the Week Awards and a pair of Player of the Week selections this season, Tarke put the nation on notice when he opened the campaign at Duke with 22 points, nine rebounds, three assists, two blocks and five steals. He nearly notched a triple-double in a victory over UNC Greensboro, when he poured in a career-high 34 points, 10 rebounds and eight assists while adding four blocks and four steals. In a win over Delaware State on Jan. 5, Tarke put up the nation’s only “5-by-5” game, when he recorded 13 points, 11 rebounds, eight assists, six steals and five blocks.

In his most recent outing, Tarke made a school-record 11 of 11 field goals while scoring 31 points to go with eight assists in a win against the Delaware State Hornets. His 11 field goals without a miss were the second-most in the nation this season and helped the Eagles earn a share of the MEAC Northern Division title, their first regular-season championship since 2003-04. Tarke becomes just the third player in MEAC history to be earn the Player of the Year and Defensive Player of the Year Awards, joining Kendell Gray (Delaware State in 2014-15) and Kyle O’Quinn (Norfolk State in 2011-12) as recipients of both awards. 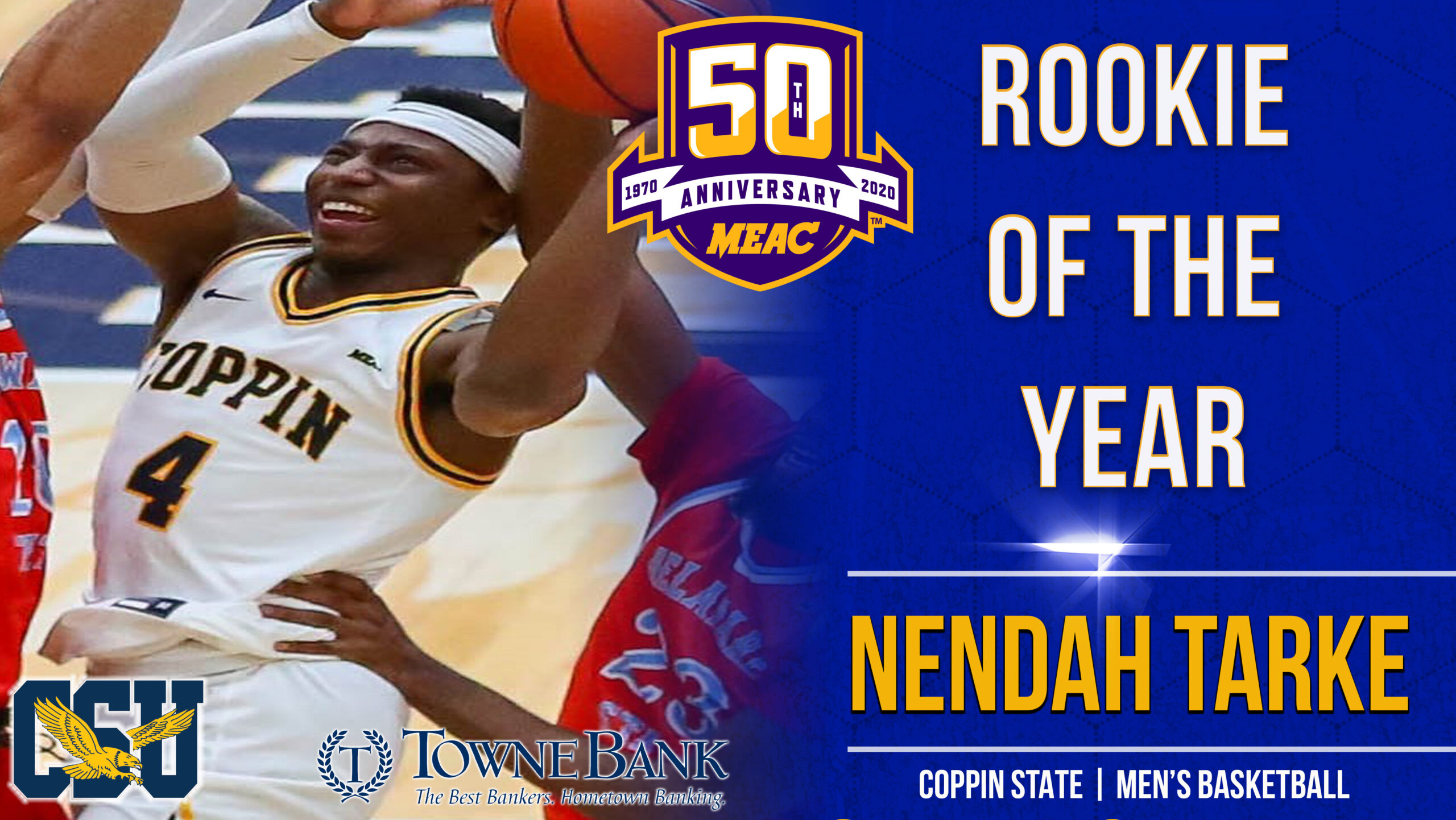 Nendah Tarke had an impressive freshman season for the Eagles, averaging 9.6 points, 4.7 rebounds and 1.7 steals per game while shooting 50 percent from the floor. A 6-foot-4 guard out of Gaithersburg, Md., Tarke upped his production in conference play to 11.8 points per game. Collecting five MEAC Rookie of the Week awards, Tarke reached double figures in scoring nine times and scored 20-plus points in victories at Delaware State and against UNC Greensboro. Tarke also had 19-point efforts against Morgan State and at Norfolk State. 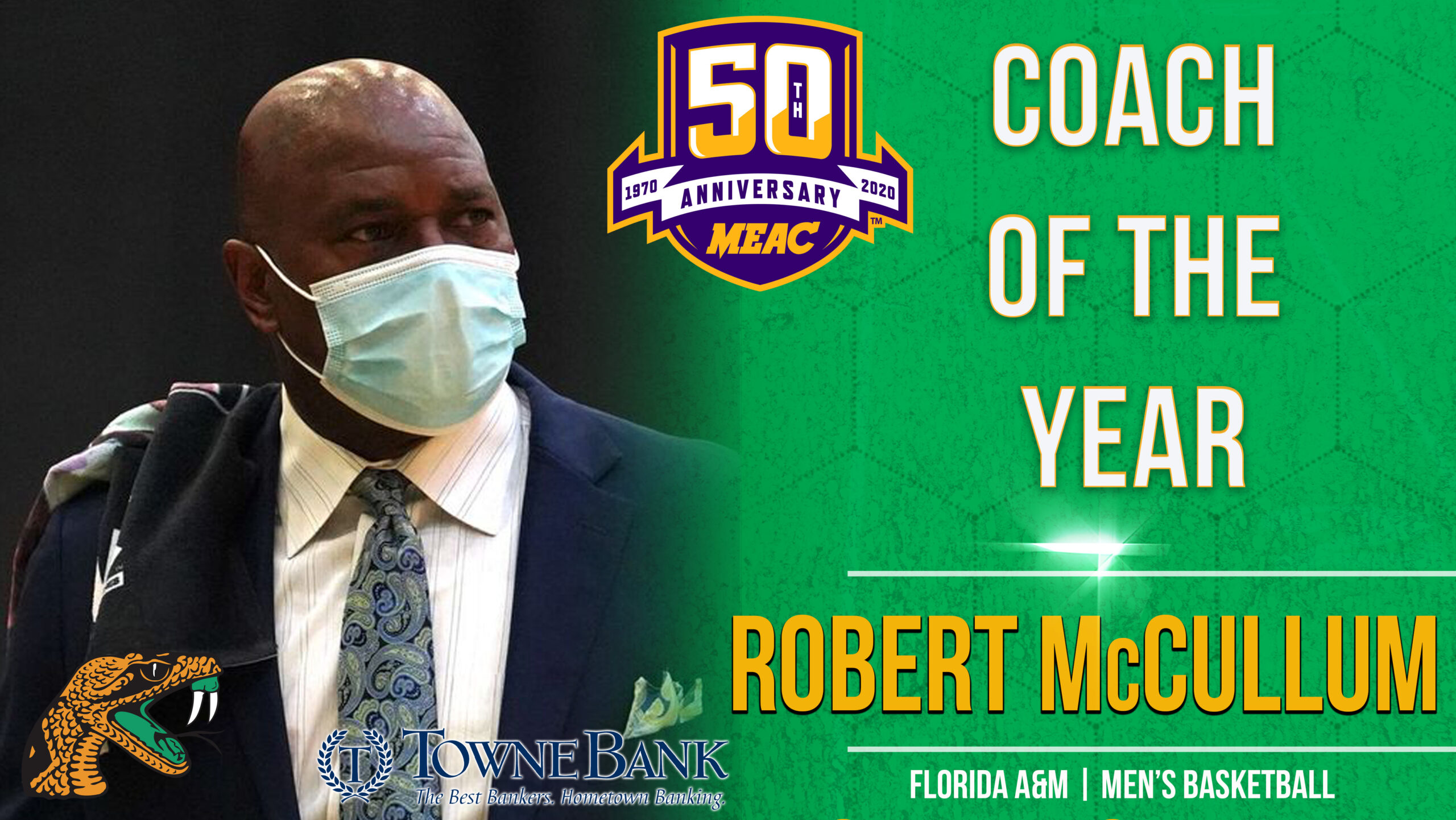 In his fourth year on the sidelines at Florida A&M, Robert McCullum has guided that Rattlers to a 7-4 mark in the MEAC Southern Division this season. The Rattlers finished a COVID-stricken season with an 8-10 record. Florida A&M is one of the best defensive teams in the MEAC, holding opponents to just 67 points and allowing just 61 points in conference play. The Rattlers as a team have the second-best shooting percentage at .439. McCullum has a player on the All-MEAC First Team, All-Rookie Team and the All-Defensive Team. 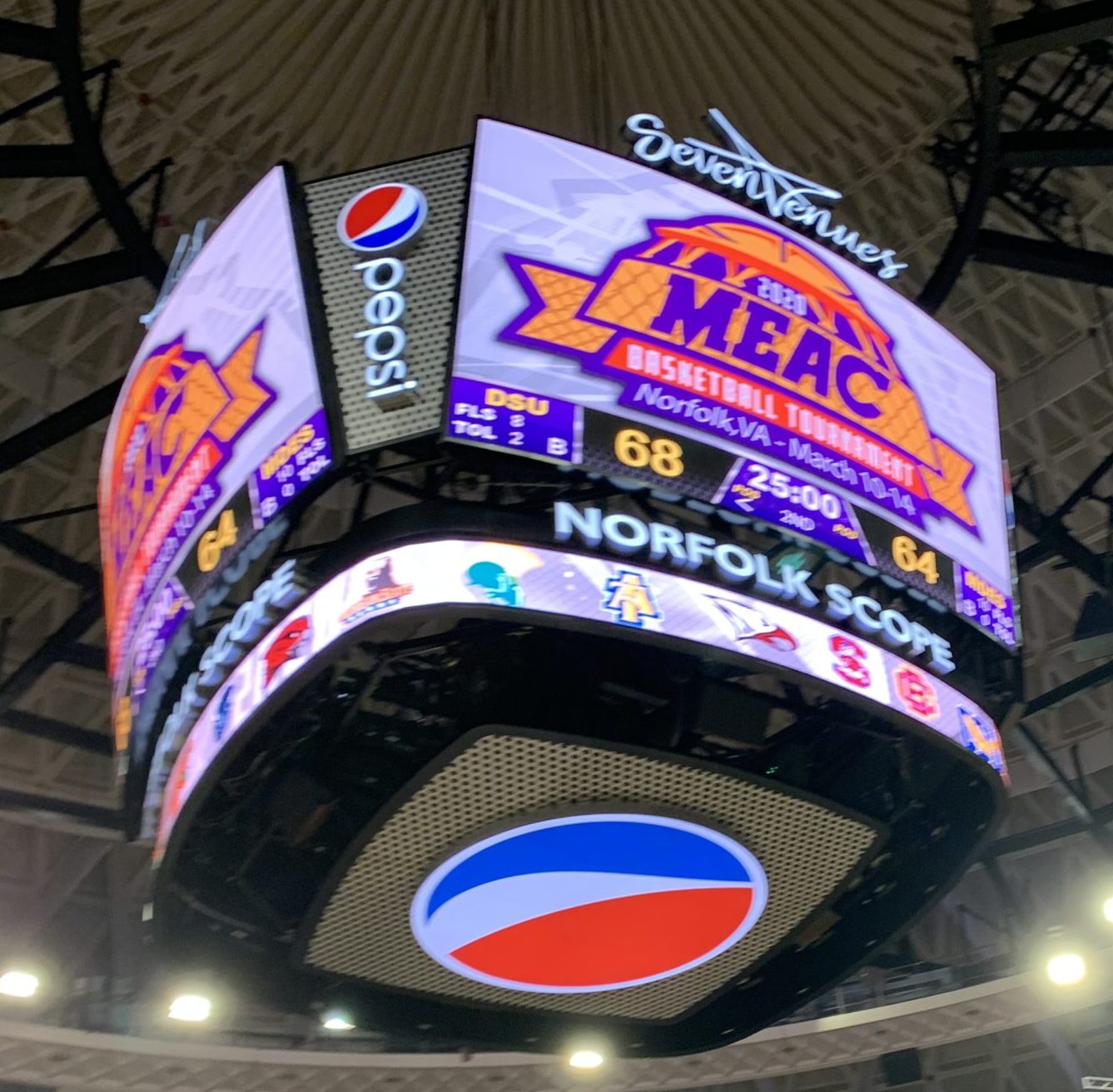 (Story and Information Courtesy of the Mid-Eastern Athletic Conference)