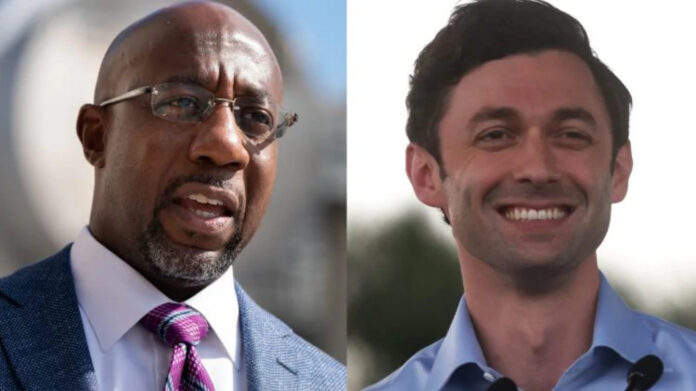 OPINION: Republicans retaining control of the Senate is a potential disaster for a President Biden and would block progress for a Democratic agenda.

Election Day has passed, but the election isn’t over, at least not in Georgia. There are two Senate runoff elections taking place Jan. 5 in the Peach State, pitting Democrat Jon Ossoff against Republican Sen. David Perdue, and Rev. Raphael Warnock against Sen. Kelly Loeffler.

These races are crucial, as the outcome will determine whether Republicans retain control of the Senate and Mitch McConnell remains Senate majority leader — an outcome spelling potential disaster for a President Joe Biden and blocking progress for a Democratic agenda.

A win for Warnock and Ossoff would effectively give Democrats control of the U.S. Senate, with a 50-50 tie and Vice President Kamala Harris providing a tie-breaking vote in the upper chamber of Congress.

The fourth Blackest state in the Union, Georgia is ground zero for Black political power, the New South, and the future of democracy in America. Black voters, Stacey Abrams and Black grassroots organizations turned Georgia blue and helped propel Biden to victory.

This is a time of transformation in a new South where Black folks, in coalition with other communities of color and progressive whites, have the power to fight off the remaining vestige of Jim Crow and white nationalist rule. Other states can and will follow suit. And once that happens, there is no turning back to the days of low voter turnout and high voter suppression, and the weapons and tactics that white supremacists have employed in the South to maintain power when they lack the votes to win.

The candidates in these two Georgia Senate races provide stark choices. On the Democratic side, Rev. Warnock, the senior pastor of Martin Luther King Jr.’s Ebenezer Baptist Church, came on the political scene when he led a sit-in and was arrested at the state capitol to demand that lawmakers expand Medicaid coverage under the Affordable Care Act in 2014.

Meanwhile, the two Republican senators seeking reelection, Loeffler and Perdue, have a few things in common –in particular, both are accused of insider stock trading.

Loeffler, whose husband owns the New York Stock Exchange, reportedly sold millions in stock days after attending a Feb. 24 White House meeting on the coronavirus. Perdue reportedly bought $185,000 worth of stock in a personal protective equipment company during the same time period. And both candidates have called on Brad Raffensperger, the Georgia Republican secretary of state to resign, presumably because he did not sufficiently rig the election and Biden and other Democrats did too well in the state.

Another issue linking Kelly Loeffler and David Perdue is their negrophobic stance, in one of the nation’s largest Black population. Loeffner, who touts her “100 percent pro-Trump” voting record, is a co-owner of the Atlanta Dream, a WNBA team, and hates Black Lives Matter.

“I adamantly oppose the Black Lives Matter political movement, which has advocated for the defunding of police, called for the removal of Jesus from churches and the disruption of the nuclear family structure, harbored anti-Semitic views, and promoted violence and destruction across the country,” said Loeffler, who criticized the WNBA support for Black Lives Matter and social justice issues.

“I believe it is totally misaligned with the values and goals of the WNBA and the Atlanta Dream, where we support tolerance and inclusion.” In response, WNBA team members wore “Vote Warnock” shirts in support of the Democratic challenger.

Loeffler has attempted to smear Warnock for supporting Black Lives Matter, and label him “anti-Israel” for signing a letter comparing the treatment of West Bank Palestinians to apartheid South Africa.

Perdue revealed his raw racism when he mocked Kamala Harris’ name at an October Trump rally in Macon, Georgia. “Ka-MAL-a, Ka-MAL-a or Kamala, Kamala, Ka-mala, -mala, -mala, I don’t know, whatever,” Perdue said of his colleague to a laughing crowd as he introduced Trump.

Calling out a Black woman’s name in such a manner was Purdue’s way of demonstrating to a white audience that Sen. Harris is different, the “other,” from one of those “shithole” countries — reflecting Trump’s verbal and policy assaults on people of color and immigrants.

These Senate runoffs are crucial because Democratic control of the Senate would allow Biden to pass all the legislation undergirding the Democratic agenda, particularly policies he will be unable to promote through executive orders.

Relief from the devastating impact of COVID-19, restoration of the Voting Rights Act, health care, cancellation of the student debt crippling the Black community, a green economy, reparations for slavery and so many other pivotal issues will require Democratic control of the Senate.

While it is quaint that Biden and McConnell are friends who brokered deals in the Senate, we can dispel any notion that McConnell would do anything short of undermining a Biden administration, just as he pledged to make Obama a one-term president and refused to clear his judicial picks.

Today, McConnell stands with Trump in refusing to acknowledge Biden as the president-elect, and supporting his president’s open-air coup attempt and fight against “election fraud” — which does not exist and is a mere codeword for Black people voting.

Black voters, particularly young Black voters turned Georgia blue. Now it is time to flip the Senate, not for Democrats or Joe Biden, but for ourselves. This is not about permanent friends but permanent interests, and voting like our lives depend on it because they most certainly do.

Georgians, you have until Dec. 7 to register to vote to participate in the runoffs.