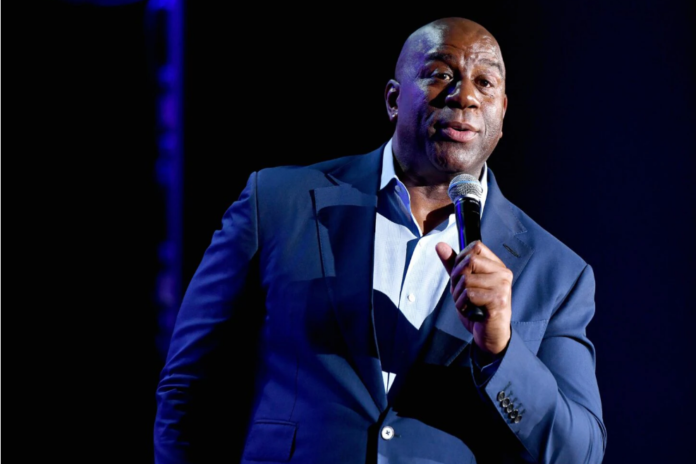 The upcoming series comes at a special time in the legacy of Johnson as Nov. 7 marks the 30th anniversary of Johnson going public with his HIV status. Per the official press release, the Apple TV series will “explore the remarkable accomplishments and global impact of Johnson’s life, both on and off the court.”

“From his humble beginnings in Lansing, Michigan to becoming a five-time NBA champion with the Los Angeles Lakers, he changed the conversation around HIV and transcended into a community activist and successful entrepreneur.”

The series does not have a release date just yet, but it already boasts an impressive creative team. On deck as cinematographer is Black Panther‘s Rachel Morrison, with Dirk Westervelt (Ford v. Ferrari) serving as an editor.

The series will feature interviews with Johnson and “never-before-seen” footage. Through this footage and conversations with business personalities and those in his inner circle, the series promises to be an “unprecedented look” at the public figure.

Sports docuseries seems to be a popular trend in the industry as of late since the massive success of ESPN’s Michael Jordan documentary The Last Dance. The Johnson doc joins a slate of other documentary projects planned for ESPN, including Beastie Boys Story, Boys State, and The Velvet Underground.

Johnson recently sat down with Gayle King of CBS Mornings, giving a candid conversation about his family and how his HIV diagnosis impacted his marriage to his wife, Cookie. He told King, “It was hard because I loved her so much and I hated to hurt her…I’ve played against some of the best basketball players in the world, right? I’ve been in championships. I’ve been in nine [NBA] Finals, so I know pressure. But there was no greater pressure than driving home to tell her.”

He also opened up about currently being undetectable, stopping the stigma surrounding HIV, and more.