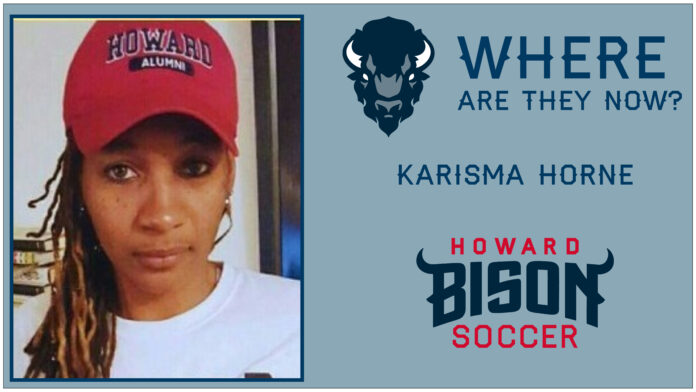 WASHINGTON (April 16, 2020) – Karisma Horne was a defender for the Howard University Women’s Soccer team from 2000-04 where she was a four year starter and co-captain. She later became an assistant coach for the team, acting in that role from 2005-08.

Currently, Horne resides in Woodbridge, Va., where she works as a procurement analyst with the U.S. Department of Health and Human Services (HHS) in the Office of Small and Disadvantaged Business Utilization. There, her mission is to manage the development and implementation of appropriate outreach programs aimed at heightening the awareness of the small business community to the contracting opportunities available within HHS.

Horne enjoys spending time with family and friends, including as a caregiver for her father, David, and her two dogs, Cupcake and Waffles. She remains active in co-ed soccer and likes to participate in her local Jeep club.

About Where Are They Now?

The new weekly series of “Where Are They Now?” appears each Thursday throughout the year.

The series will feature former student-athletes from all sports and eras, highlighting their careers as athletes at the University and what they are presently doing.

All interested former athletes and their coaches should submit a short bio, a recent head shot and contact information on how they can be reached via email to Tiffany Hoyd (Tiffanyhoydhu19@gmail.com) and Derek W. Bryant (derek.bryant@howard.edu).