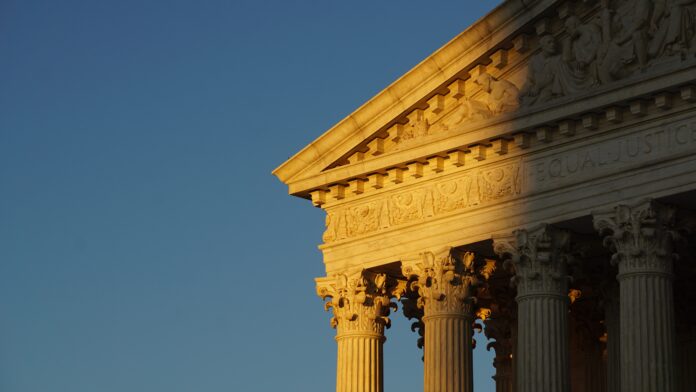 The outlet reported that a copy of the opinion from Justice Samuel Alito reveals an “unflinching repudiation” of the 1973 ruling that granted the legal right to terminate a pregnancy, as well as Planned Parenthood v. Casey, a 1992 case that upheld Roe v. Wade.

“We hold that Roe and Casey must be overruled,” Justice Alito wrote, according to the document that has been reviewed by former Supreme Court clerks who told MSNBC that the draft appears to be authentic. “It is time to heed the Constitution and return the issue of abortion to the people’s elected representatives.”

While it has not been confirmed, this leak may mark the first time a Supreme Court opinion has been disclosed before a ruling has been announced.

In the opinion draft, Justice Alito compared the issue of abortion to racial discrimination. Roe v. Wade, the conservative opinion noted, is parallel to Plessy v. Ferguson, the 1896 case that upheld racial segregation in the United States and created the “separate but equal” doctrine. That ruling remained law until it was overturned by the landmark case Brown v. Board of Education.

Justice Brett Kavanaugh, who was quoted by Alito in his opinion, said that Plessy v. Ferguson “was ‘egregiously wrong’ on the day it was decided.”

In his opinion, Alito noted that some early abortion rights advocates also supported eugenics, an erroneous theory that whites were a dominant group over African Americans in the United States.

“Some such supporters have been motivated by a desire to suppress the size of the African American population,” Alito writes. “It is beyond dispute that Roe has had that demographic effect. A highly disproportionate percentage of aborted fetuses are black.”

The case that the Supreme Court is set to rule on that would overturn a nearly 50-year legal precedent involves the abortion clinic Jackson Women’s Health Organization, which challenged the State of Mississippi’s 2018 abortion law, the Gestational Age Act, that outlaws the procedure after 15 weeks and does not make exceptions for rape or incest.

On Tuesday morning, President Joe Biden released a statement about the Supreme Court opinion draft leak. While the president acknowledged that “we do not know whether this draft is genuine, or whether it reflects the final decision of the Court,” he affirmed the Biden-Harris administration’s commitment to defending Roe v. Wade.

“If the Court does overturn Roe, it will fall on our nation’s elected officials at all levels of government to protect a woman’s right to choose. And it will fall on voters to elect pro-choice officials this November,” said President Biden. “At the federal level, we will need more pro-choice Senators and pro-choice majority in the House to adopt legislation that codifies Roe, which I will work to pass and sign into law.”

My statement on the reported Supreme Court decision draft. pic.twitter.com/Kt3bP0kzqU

Shortly after the news, Democratic members of Congress and advocates decried the likely ruling from the Supreme Court.

Ocasio-Cortez’s fellow member of “The Squad,” U.S. Congresswoman Ayanna Pressley, also tweeted a reaction to the opinion draft, plainly writing, “Abortion care is a fundamental human right and we must legislate like it.”

“Expand the Court. The lives of women across this country depend on it,” tweeted U.S. Congressman Mondaire Jones, a member of the House Judiciary Committee.

The potential end of Roe v. Wade has been long anticipated, as conservative groups have for years lobbied for its overturning. One of those groups, the Federalist Society, compiled lists of pro-life judges for President Donald Trump to choose from in selecting his Supreme Court nominees. All three of his appointed justices, who now make up the conservative majority on the court, appeared on those lists.

For years, Republicans have become increasingly hostile toward abortion. States controlled by the GOP began defunding Planned Parenthood, the largest abortion provider in the nation, while some states enacted laws restricting the procedure.

According to the Guttmacher Institute, more than 100 restrictive abortion laws have been enacted in the United States since last year.

In a public statement in response to the Supreme Court opinion draft, Planned Parenthood President Alexis McGill Johnson said, “Let’s be clear: Abortion is legal. It is still your right.”

“This leaked opinion is horrifying and unprecedented, and it confirms our worst fears: that the Supreme Court is prepared to end the constitutional right to abortion by overturning Roe v. Wade. While we have seen the writing on the wall for decades, it is no less devastating, and comes just as anti-abortion rights groups unveil their ultimate plan to ban abortion nationwide,” the statement reads.

“Understand that Planned Parenthood and our partners have been preparing for every possible outcome in this case and are built for the fight. Planned Parenthood health centers remain open, abortion is currently still legal, and we will continue to fight like hell to protect the right to access safe, legal abortion.”