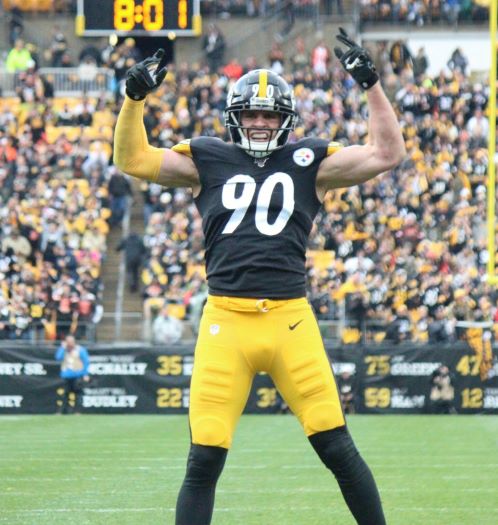 PITTSBURGH, PA–The Pittsburgh Steelers were hoping to use the Bye Week to rest, regroup, and recharge after a 2-6 start with hopes to start the second half of their season with wins. On Sunday, they welcomed the New Orleans Saints into Acrisure Stadium and sent them home after beating them 20-17. It was the Steelers’ first win vs. the Saints since the 2006 season.

“At home in front of our fans, appreciative of the efforts of everyone. A lot of positive contributions in three phases,” said Steelers head coach Mike Tomlin. “Obviously, things we can do better and things we need to work on. It’s good to work on those things with the win.”

The Steelers truly received contributions from their 3 phases as they improved their record to 3-6 on the season. QB Kenny Pickett (16/30, 199 yards, 59 yards rushing, TD run) played error-free football as he led the Steelers 4 scoring drives, two of which resulted in TDs: A 1-yard TD run by WR George Pickens and Pickett’s own 1-yard TD run. The running game had their best performance of the season as they rushed for 217 yards, led by RB Najee Harris’ season-high 99. In addition to Pickett’s 59 yards on the ground, undrafted free agent Jaylen Warren added 37 and Pickens 23.

“Appreciative of the win, appreciative of the efforts. A lot of fun in the locker room, man. It’s good to get the job done,” commented Tomlin. “We don’t take it for granted. We appreciate it. We understand it’s not anything mystical. It’s good work. It’s minimizing negativity, staying on schedule on offense, possessing the ball, running the ball, winning possession, downs on defense.”

The defense also showed much improvement as not only did they hold QB Andy Dalton and the Saints’ offense to 10 points, but they also sacked him twice (courtesy of LB Alex Highsmith) and intercepted him twice (S Damontae Kazee, CB Levi Wallace). The defense was also charged-up from the return of reigning NFL Defensive Player of the Year TJ Watt as he played his first game since missing several games due to a pectoral injury. Watt finished the game with 4 tackles and one QB hit (non-sack)

“We were more concerned about minimizing [Alvin] Kamara and some of the things they did with [Taysom] Hill and the wildcat things,” remarked Tomlin. “I thought we did a great job of minimizing those things, and it cleared out the clutter for us to do other things. The rush was sufficient, but anything we did defensively started with working to minimize Kamara and the things they were doing with 7 [Taysom Hill] at quarterback.”

Watt was truly excited about his return to the field: “In front of the fans today, to be able to create an awesome atmosphere as a defense, being able to fly around, being able to pin our ears back at the end there. That’s all you ask for as a defensive rush, man. I had a lot of fun today.”

Although K Matthew Wright (filling in for the injured Chris Boswell) made 2 field goals, he also caused some concern as he missed 2 as well. “We left some points out there in the kicking game today. We’ll get back to work with Matt Wright and company,” said Tomlin. “Operationally, it could have been better in some of those things, but we’re always going to fall short of perfection. It’s good to win, though, in the process.”

The Steelers will now set their sights on preparing for their next game against AFC North Rival Cincinnati next Sunday at Acrisure Stadium. Tomlin’s goal for the team is for them to keep improving, while continuing to win.

“It’s good to work on those things with the win. And so, we’ll take those lessons and move forward and get ready for our next opportunity. We’ll be right back here next week. We’ve just got to keep digging.”

Notes: The Steelers honored the 2022 Hall of Honor Class of Heath Miller, Myron Cope, Ray Mathews, and Sam Davis with a halftime induction ceremony, while Louis Lipps, a member of the 2021 class, also was introduced after not being available for the ceremony last year.