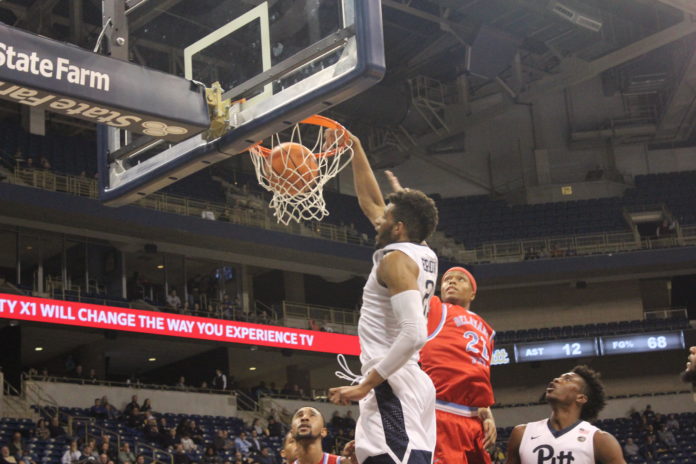 The Pittsburgh University Panthers basketball team is putting up average numbers this season, but looked for and established their rhythm in their 74-68 win over Delaware State Tuesday night in the Peterson Event Center in front of a very sparse crowd (2372 people). The  Panthers fresh off a 21 point win over McNeese State this past weekend improved to 7 wins against 5 losses, while the Hornets of DSU suffered their 12th loss in 15 games this season.

The Panthers controlled the game right from the tip scoring the first five points of the game within the first five minutes. 6-foot five-inch junior guard Jared Wilson-Frame who finished the night with 13 points started the home teams scoring dropping in a quick 20 footer from beyond the three-point line. Panthers freshman guard  Marcus Carrs’ trey followed and Pitts fast start allowed coach Kevin Stallings to go to his bench early in the half at the 12:43, Delaware State head coach Keith Walker countered but the Panthers extended their lead by 14 (20-6)  just before the 10-minute mark of the opening half.

The Pittsburgh lead exploded to 23 by the 6 and a half minute mark of the half as reserves Parker Stewart  (7 Points on the night ) and Jonathan Milligan ( 13 Points ) came off the bench to contribute six and five points respectively in a short period of time. The visiting Hornets could only muster 10 points and were looking to Freshman guard Johquin  “Pinky” Wiley(16 points on the night) and Senior Forward Kavon Waller (17 Points on the night)  for all of their scoring.  Pitts’ Shameil Stevenson scored his first two points on an Ally-oop from Khameron Davis as the action got underway following a TV timeout and the Panthers went into the locker room with a 22 point lead and all the momentum and energy in the Peterson Event center firmly on their side.

The second half of the contest the Hornets got two points immediately from Simon Okolue (12 Rebounds and 12 Points) before  Stephenson hit a trey for the Panthers which was answered by the Hornets Walker following a Trey from Delaware State Guard Kavon Waller. Artem Tavakalyan (10 Points and 6 Rebounds) added a three-pointer and now the score was  47-34 Pitt with 15:21 to go in the game. The Hornets were Buzzing right along giving the Panthers fits before Khameron Davis nailed a trey( 50-34 Pitt). As play started getting a little sloppy with turnovers and fouls as well as missed shots on each end of the court, you could see coach Stallings and Walker getting after their players to settle down at the 13:10 mark when Waller nailed a three for the visitors cutting the Pitt lead to 13 (50-37).

At the 11:30 mark of the game the Hornets had signs of hope as the once 20 plus Pitt lead was nearly cut in half. Waller was the man at this point of the game for DSU with his 14 points. Marquis Collins pair of free throws cut the lead to 11 Points (50-39 Pitt ). The Hornets continued pestering the Panthers and cut the lead to 9 points with 10:11 to go in the contest. Wilson-Frame answered from beyond the three-point line and extended the lead back to 12. Double Techincal fouls followed as  Pitts Boykins and DSU Collins were charged with  9:47 on the clock and the score 53-41 Pitt.

The shooting woes continued for the home team as Delaware State  cut the Panther lead to just 6 points with  5 min left in the game as the man the Hornets call Pinky continued to try and will the Hornets into the lead and you could actually hear visiting fans from Dover yell out “Play Ball Pinky, Play Ball”. 62-56 Pitt was the score with 3:43 to go in the contest.

Wiley was at the line for two shots with 3:43 to go and sank one to cut the lead to 5,  with a drive to the hole Milligan extended Pittsburgh’s’ lead to 7 and The Hornets  Okolue cut it back to 5 with a baby hook with 2:17 to go in the game.  That is when Pinky struck again cutting the lead to three 64-61, Pitt got a turnover with 1:10 to go in the game and coach Stallings called a timeout to get his troops together. This game had completely turned around at this point DSU had outscored Pitt 34 to 18 in the Second half after the Panthers outscored the Hornets 44-22 in the first half.

On the inbound, the Panthers worked the  Shot clock and  Khameron Davis dropped in a trey with just over 40 seconds left  (67-61 Pitt). Then Pinky was sent back to the line and dropped in two foul shots cutting the lead to 4 (67-63 Pitt).The game appeared to be over as Wilson-Frame sank two free throws from the charity stripe, But the Hornets were not done as they cut the lead to 2 (70-68) with 22 seconds on the clock.

In the closing seconds of the game, the Hornets pressed again as the ball went out of bounds with  15 seconds left Milligan who was fouled and stepped to the line sinking two shots making the score 72-68 Pitt. But Pinky was not done as he drove the lane and missed a lay-up, which forced his teammates to foul Wilson-Frame who sank both shots sealing the victory for the Panthers  74-68.