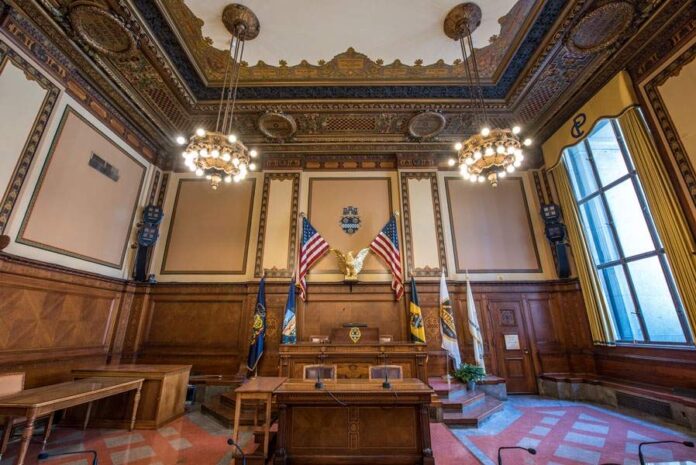 Wilkinsburg Borough is trapped in a cycle that may prevent its economic recovery, and a group of residents has petitioned the City of Pittsburgh for help to avoid failure by annexing the borough.

The borough, which already relies on the City to provide some services including trash collection and fire services, and shares responsibility for educating its high school students, and some middle-school students, with Pittsburgh Public Schools, has a property tax rate nearly twice that of the City. In many cases, proponents of the annexation contend, this high tax rate causes not only population loss but also prohibits potential business investments in the borough, which leads to a requirement for further tax increases.

The slightly larger than two-square-mile borough has approximately 14,000 residents, who would be entitled to vote in a referendum on the issue, which was pulled from the November ballot but which organizers hope to resubmit for inclusion on the next ballot. As a preliminary step, a petition of residents, which required less than 650 signatures, was circulated, and then submitted to Allegheny County Court of Common Pleas. As a result, the Pittsburgh City Council now must consider the annexation, and must eventually achieve the approval of five of the nine Pittsburgh City Council Members. At that point, the referendum would appear on the ballot in May of 2022.

Pittsburgh City Council held a public hearing on Saturday, December 4, to hear concerns on both sides of the issue. The hearing held via Zoom under the supervision of Council President Theresa Kail-Smith, afforded residents three minutes to argue in favor of, or in opposition to, the annexation.

A major concern of some in opposition is that many Wilkinsburg residents are unaware of the impacts of the potential annexation. While property taxes would decrease, they say, the wage tax would triple, from 1 percent to 3 percent, while the deed transfer tax would increase from 1 percent to 4 percent. With a large proportion of rental properties, this would have an adverse financial impact on tenants. Another concern is gentrification, where existing local residents would be pushed out in favor of those willing to invest in the borough, increasing property values.

On a pro-merger website (wilkinsburgmerger.org), however, proponents of the move contend that rents could potentially stabilize or perhaps decrease as a result of the savings garnered by landlords. They also claim that savings could encourage landlords to improve the condition of their properties, in order to lower tenant turnover and increase demand for those properties. Additionally, they say, tenants would benefit for “more robust public safety and infrastructure services,” including City-funded programs for improvement incentives, property rehabilitation, legal and rental assistance and short-term housing assistance through the Urban Redevelopment Authority.

First Ward Council Representative Linda Atkins, testifying at the hearing, says that “this drive is being backed by the WCDC, among others, but, to make it clear, the WCDC is a non-profit. It doesn’t have representation by Council, by elected officials. They have been asked to cease and desist by Council in Wilkinsburg, and they have the audacity to pull this. They use a large portion of their budget against the community they are to serve.”

Speaking in favor, Petrulli says “Basically we’re cutting services, we’re losing population, and Wilkinsburg is on an unsustainable path. We just lost about 10 percent of our population according to the last census, and taxes are what have been truly stymieing redevelopment in our borough. With those high taxes, you’re putting up a wall against redevelopment, against home buyers coming into the borough…”

“Any time I try to suggest to a friend to look at my neighborhood, to be my neighbor, they’re like, ‘Oh, that’s Wilkinsburg. The taxes are really high. I can’t do that,’” Petrulli says. “Since I’ve been a borough resident, since 2013, I’ve only noticed that more blight and abandonment has happened. The situation has not improved, and I don’t see it improving any time soon unless something new and drastic is done, like joining the City and reducing our tax burden.”

Pittsburgh City Council members are also conflicted about the potential annexation. District 4 Council Representative Anthony Coghill says he’s done some research on Wilkinsburg Borough since the subject has arisen, including a five- or six-hour in-person tour of the borough.

“I drove up and down every street, every business corridor that Wilkinsburg has, and I’ll tell you, I was shocked. I was shocked to see the amount of vacant homes, abandoned homes, vacant buildings in the business district,” Coghill says. “What it comes down to is, it is impossible to get investment into Wilkinsburg right now with its current property taxes.”

Coghill says he has had lengthy conversations with City Controller Michael Lamb and County Executive Rich Fitzgerald about a potential annexation, and finds them in agreement.

“So, I made a list of pros and cons,” Coghill says. “Population is very important for [the City of Pittsburgh] right now. We’re dangerously close to dipping below 300,000 people, and that puts us at risk to not receive federal and state grant monies.”
“I also like the idea of land acquisition,” Coghill says. “I’m not quite sure how much municipal land is there, yet, but I know with what’s there in abandoned houses and businesses that are just boarded up at this point…”

Coghill also feels that an annexation would be an overall win for Wilkinsburg. Despite the higher taxes for renters, “It will be short-term pain for long-term gain, because, without the proper investment in the buildings and the housing stock around you, it’s going to continue to decline. I see it right in front of my eyes.” He says the URA and the Land Bank are good sources for those investments.

Coghill worries about the City having to stretch its own resources, but “tend[s] toward voting in favor of the merger,” but will withhold a final decision pending the opinions of his fellow Council Members.

District 6 Representative Ricky Burgess, whose district borders Wilkinsburg, objects to the process of annexation over a that of a potential merger, citing the lack of ability for City Residents to have direct input by vote in the annexation process.

“I probably philosophically, over time think it’s probably a good idea for the two to come together,” Burgess says. “But I do worry about this process we’re using, It’s just so divisive. I think a merger, where the two cities’ voters could participate, would be a better model.”

“I’m also very concerned that the incoming Mayor of Wilkinsburg, and a majority of Council, representing Wilkinsburg, are not in favor of this,” says Burgess. “You have lots of people who will have to be responsible for the outcome not with the ability to participate. There are other processes, the state allows. This is not the regular model.”

“I’m not philosophically opposed to Wilkinsburg becoming a part of the City of Pittsburgh. I’m uncomfortable with the process.” Burgess says he feels the process is undemocratic, “because I don’t see all the stakeholders having an opportunity to participate in the merger.”

“Every day, day-in and day-out, the Third Council District fights for resources,” says District 3 Representative Bruce Kraus. “Those resources are primarily around vacant or blighted properties. We’ve all had our concerns over the years about the costs of demolition, dealing with blighted properties and the burden that puts on taxpayers and leadership here in the City. I’m very mindful of the Hilltop Neighborhoods that I represent, and resources that are scarce to begin with, and that I fight for every day, to make sure there is equity in the distribution of those resources.”

Council President Theresa Kail-Smith, who represents District 2, says she has received numerous phone calls about the annexation since the hearing was announced, “predominately from residents in opposition. I asked them to contact the Clerk’s Office, so that I could share with Council Members.”

“We need to be more wise about how we do these things, and do them more methodically and more inclusively, and are actually hearing, and bringing all our residents to the table and having conversations.”

“I’ve talked to people on both sides. I think people who are for the merger love Wilkinsburg just as much as those who are not,” says Coghill. “They just have different philosophies.”

Council will hold additional public hearings, as well as considering the results of Saturday’s hearing at their regular Wednesday Working Groups meeting on December 8.

Photo courtesy of City of Pittsburgh