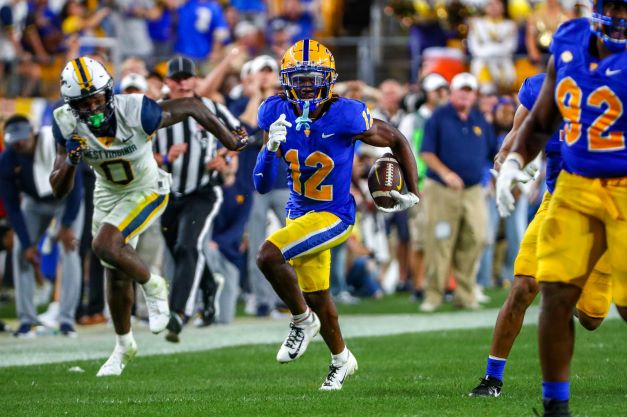 Pitt junior cornerback M.J. Devonshire, whose pick six produced the winning points in the Panthers’ thrilling victory over West Virginia, has been named the Paycom Jim Thorpe Award Player of the Week for the first full week of the college football season.

Thursday’s announcement from the Thorpe Award, which is annually presented to the best defensive back in all of college football, marks another prestigious weekly recognition for Backyard Brawl hero Devonshire, who was also named ACC Defensive Back of the Week.

One week ago on the ESPN and College GameDay national stage, Devonshire alertly snagged a tipped pass and raced 56 yards for the go-ahead touchdown with 2:58 left in the game. The Panthers made one final defensive stand to claim a 38-31 win over their historic rivals.

Devonshire (Aliquippa, Pa./Aliquippa) defended three total passes and added three tackles against the Mountaineers. His interception return will go down as one of the most iconic plays in the 105-game history of the Backyard Brawl.

Pitt’s defense has scored touchdowns in three consecutive games dating back to the 2021 ACC Championship Game against Wake Forest, and the Panthers lead the Football Bowl Subdivision (FBS) with five interception returns for touchdowns since the start of the 2021 campaign.

Pitt (1-0) hosts Tennessee (1-0) this Saturday at Acrisure Stadium. It will be the first time that a team from the Southeastern Conference has visited Pittsburgh.

The Panthers (No. 17) and Volunteers (No. 24) both appeared in this week’s Associated Press Top 25, meaning this also marks the first ever ranked nonconference matchup at Acrisure Stadium (previously Heinz Field).

Dubbed the “Johnny Majors Classic” in honor of the legendary Pitt and Tennessee head coach, the game will be nationally televised by ABC (WTAE in Pittsburgh) and kick off at 3:30 p.m.