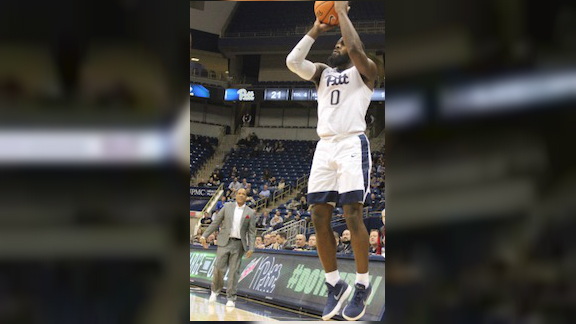 (Pittsburgh,Pa) Everyone always lets one slip away, or at least that’s the way they tell the story. The best example is when a person has been  fishing and explains how they were so close to catching the Big One…only for the fish to slip off the line and back into the water. The story gets more interesting, because the storyteller had no witnesses.

Well, the Pitt Panthers also had one slip away and find themselves still in search of their first Atlantic Coast Conference (ACC) win. Wednesday night Pitt welcomed Wake Forest to the Petersen Events Center for a late-night matchup. The Panthers fought hard against the Demon Deacons executing their most-dedicated effort in conference play all season, only to fall short 63- 57, in front of 2,240 witnesses.

“I thought the difference in the game was that they played like they had some experience and we just kept doing things that seemingly didn’t.”

“You foul them on a three-point shot and come out of the timeout and all we talk about in the timeout is don’t bail them out with a foul. We didn’t play with enough discipline to win this game and our lack of discipline played out and it is too much to overcome. We had a chance to win the game, we played hard and we competed.”

Unfortunately, those words have described Pitt all season and that’s the reason  they’re  8-21 overall and 0-16 in the conference and are now a Virginia loss away from going winless at home in conference play. Their 21 losses this season are the most by any Panthers team since 1976-77 campaign, that year Pitt went 6-21 in the now-defunct ECBL. The defeat was also their 16th in a row, extending a program record.

It truly makes the fact that they were ranked #1 in the nation 9 years ago seem like a lifetime ago, doesn’t it?

The Panthers showed up to fight for one half. They punched the Demon Deacons in the mouth as they led by as much as 6 points with Wake Forest only getting as close as a 10-10 tie. Pitt would go into the locker room at the half with a 28-27 lead and the hopes of getting their first ACC win seemed likely.

But once again, the second half proved it wasn’t Pitt’s night.

The Panthers lead didn’t last long as Wake Forest took advantage of multi-possession leads in the second half and eventually ran away with the victory. Unlike previous games, the Panthers hung close  trailing by 3 points with 27 seconds left in regulation. Pitt Forward Shamiel Stevenson hit 1 of 2 free throws and Guard Marcus Carr hit a layup. But Wake Forest sealed the win with 2 free throws and improved their record to 11-17 and 4-12 in the conference.

Guard Bryant Crawford led Wake Forest with 14 points and 7-1 Center Doral Moore led with 9 rebounds and added 13 points. For the Panthers guards Jared Wilson-Frame and Carr scored 11 points each and Stevenson added 10 points as he helped keep Pitt afloat in the first half. There are only  2 games remaining in the regular season and the Panthers now need to find a way to win against the top ranked Villanova Wildcats Next , before going on the road to take on the Fighting Irish of Notre Dame.

“I think coaches in general live on the hot seat.”

Said Stallings about his future with Pitt.

“I have never spent a lot of time worrying about that and I try to do the best I can for my players every day, and I said when I took this job that it would be about the players and that is what it is about. I will work tonight and try to find a way to help them be better for Saturday and that starts tomorrow. This is not about me, it is about them and me doing what I am supposed to do and that is to be successful.”