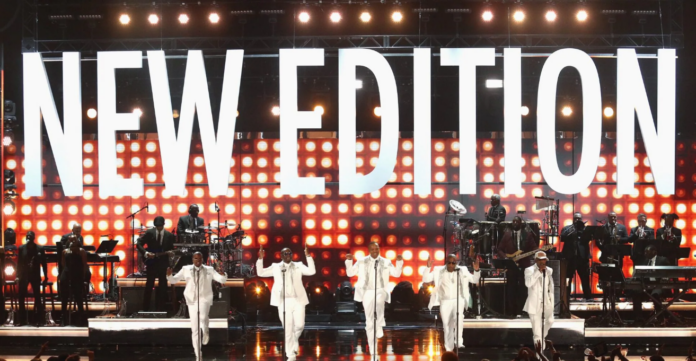 Get ready, New Edition fans! According to recent reports from their agency, the R&B group has big plans for 2022, including a tour with all six members.

New Edition has been in the headlines a lot lately as they prepare for an exciting 2022. Per Variety, the group recently signed with Creative Artists Agency (CAA), which has announced plans for a U.S. arena tour as well as a residency in Las Vegas. All six members have officially signed with the agency, including Ronnie DeVoe, Bobby Brown, Ricky Bell, Michael Bivins, Ralph Tresvant, and Johnny Gill.

Per Variety’s report, “The company will represent the group in all areas worldwide, including touring, theatre, literature, TV/film, production, composing and others. Since 1984, the group has released six studio albums and multiple solo efforts and won several Soul Train and American Music Awards and the BET Lifetime Achievement Award.”

New Edition was the focus of a three-part 2017 biopic miniseries produced by BET titled The New Edition Story. The biopic, which aired consecutively over three nights, drew 29 million total viewers.

The same year the group received the BET Lifetime Achievement Award, which was presented by this year’s recipient, Queen Latifah. She said at the time, “We can all agree [New Edition] transcends generations and have earned the title living legends.”

Per this week’s announcement obtained by Variety, “The group plans a U.S. arena tour next year, along with a residency in Las Vegas.”

CAA’s official music page also shared the news with their followers, sharing a picture of the New Edition logo with the band members’ names lined on the bottom.

The caption reads, “New client: the legendary Pop and R&B kings, New Edition! Featuring Ronnie DeVoe, Bobby Brown, Ricky Bell, Michael Bivins, Ralph Tresvant, and Johnny Gill. 👑 From Roxbury, MA to superstardom, a 2022 arena tour is already in the works along with their own Las Vegas Residency. Stay tuned…and welcome to the fam!.”