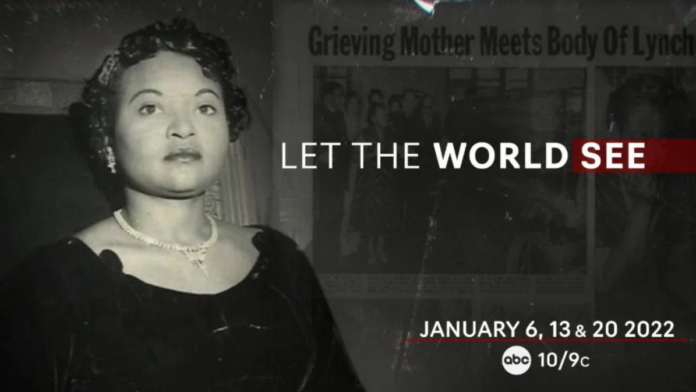 ABC’s latest docuseries is here, and it’s a powerful and moving historical project that is a must-watch for the entire family. Let the World See follows the life of American activist and mother of Emmett Till, Ms. Mamie Till-Mobley, and airs following the new Women of the Movement scripted series that also follows her life.

The docuseries follows the early life of Till-Mobley, her marriage to Emmett’s father and the events leading to her son’s brutal murder in 1955. The series is described as a, “fresh and deep examination of Ms. Mamie Till-Mobley’s fight to bring her son Emmett Till’s body home to Chicago and her pivotal yet heartbreaking decision to have an open-casket funeral for the public to see, which ultimately served as a turning point for the civil rights movement.”

TheGrio had a chance to check out the series ahead of Thursday’s premiere and has major takeaways and exclusive details on why the series should make it to your watch list this Thursday.

The series features chilling first-hand accounts from the Till family, detailing major moments in Emmet Till and Mamie Till-Mobley’s life. Stirring interviews in the series include Till’s cousins Rev. Wheeler Parker (who as the series details, was a witness to the abduction), Ms.Ollie Gordon and Amos Smith, and Ms. Thelma Wright. By weaving in historical moments like Brown V. Board of Education with Till’s family’s very personal accounts, the series shines new light on and adds context to this American tragedy.

As theGrio previously reported, NAACP Image Award-winning actress Nia Long has joined the docuseries with powerful readings. Long reads excerpts from Till-Mobley’s memoir “Death of Innocence: The Story of the Hate Crime that Changed America.” By consistently going back to Till-Mobley’s own words, the readings help the viewer truly see the story through her eyes, helping to ground the devastating story.

That’s right, former First Lady Michelle Obama appears in the first installment of the series, offering her own perspective and insight on Till’s story, and how it correlates with Black American life today. In one stirring moment, Obama speaks to the burden Black mothers face in this country when having to raise their children with awareness of the dangers of racism, while also trying to maintain their innocence and youth.

The limited docuseries premieres Thursday, Jan. 6 at 10 p.m. EST on ABC, with subsequent episodes airing on the following two Thursdays. For more on Let The World See, you can head to the official website, here.

5 reasons why you should watch ‘Selling Tampa’