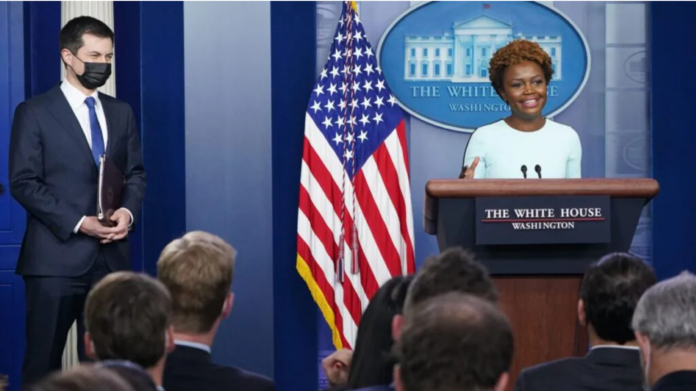 Karine Jean-Pierre will make history as the first Black and openly LGBTQ+ person to serve as White House press secretary, the White House announced in a statement on Thursday.

Jean-Pierre will assume the role on May 13 when Jen Psaki steps down from her post. Psaki announced her departure from the Biden-Harris administration earlier this year.

“I am proud to announce that Karine Jean-Pierre will serve as the next White House Press Secretary,” President Joe Biden said in a statement.

“Karine not only brings the experience, talent and integrity needed for this difficult job, but she will continue to lead the way in communicating about the work of the Biden-Harris Administration on behalf of the American people.”

The president said that he and First Lady Dr. Jill Biden have known and “respected” Jean-Pierre for a long time, adding “she will bring a strong voice speaking for me and this administration.”

President Biden also saluted Psaki for her service and for setting “the standard for returning decency, respect and decorum to the White House Briefing Room.” The president thanked Psaki “for raising the bar, communicating directly and truthfully to the American people, and keeping her sense of humor while doing so.”

Jean-Pierre, 44, currently serves as White House deputy press secretary. She is the first openly queer Black woman of Haitian descent to serve in that role. Jean-Pierre, who occasionally led press briefings in Psaki’s absence, was expected to be her successor when the news of her departure became public.

When taking on the job in 2021, Jean-Pierre became only the second Black woman to lead a formal White House press briefing in history and the first in 30 years.

During Thursday’s press briefing, Psaki called Jean-Pierre to the podium to congratulate her “friend” for the promotion. “I’m just so grateful to have had Karine by my side for this over the last 15 months and I just can’t wait to see her shine at the podium,” said Psaki.

Later on during the briefing, Jean-Pierre was asked to come back to the podium to speak to what the historic moment meant to her. She described the day as ”emotional,” admitting that she and Psaki had been crying before coming out to address the press.

“I understand how important it is for so many people out there. So many different communities that I stand on their shoulders,” she told reporters. “And so it is an honor and a privilege to be behind this podium.

In an interview with theGrio earlier this year, Jean-Pierre reflected on the unique space she occupies as a Black, queer woman who is the daughter of immigrants.

“I am one of those people…where statistically I am not supposed to be where I am today, statistically that’s what I was told growing up,” said Jean-Pierre.

“I am not supposed to be in the space having an office in the West Wing…going in and out every day through the White House gates and being able to to be part of this administration because of what I grew up with.”

Prior to her appointment at the White House, Jean-Pierre served as senior advisor and national spokesperson for MoveOn.org and a political analyst for NBC News and MSNBC. She was also a lecturer in international and public affairs at Columbia University. Jean-Pierre’s political background includes serving as a political director for the presidential campaigns of John Edwards and Barack Obama, as well as President Obama’s administration.

But pollster Cornell Belcher of Brilliant Corners Research & Strategies told theGrio that Jean-Pierre is “remarkably qualified” and “well-positioned” for her new role, heading off any suggestion that her appointment to lead the White House press office was a political calculation.

“I don’t think he needs to appoint another African American, being that he just had one of the biggest victories of quite some time by appointing the first African American woman [to the Supreme Court],” Belcher told theGrio.

In a statement to theGrio, Karen Boykin-Towns, vice-chair of the NAACP Board of Directors, said Jean-Pierre “embodies the hopes and dreams of so many.”

“Today we celebrate her as our country’s first Black woman and first openly LGBTQ+ White House press secretary. Karine is more than prepared for this assignment and watching as she leads the daily White House briefings will be a must,” said Boykin-Towns.

In her interview with theGrio, Jean-Pierre noted the importance of her work inside the White House press office in making sure she’s able to voice the president’s message, particularly to the Black community.

“The work that we have to do, and what we need to be able to deliver for the Black community, and the promises that this president has made about equality and making sure that equity is at the center of everything that we do – that is why I am here.”