HU sought to even their season record but dropped to 0-2 on the young season.

Senior guard Charles Williams (Richmond, Va.) paved the way, scoring a team-leading 21 points on 50-percent (7-of-14) shooting from the field. 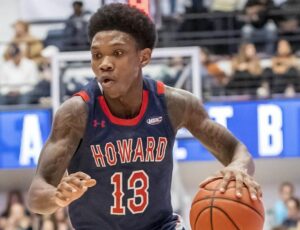 The Bison jumped out to an early 12-7 advantage after a pair of freebies from freshman Khalil Robinson (Columbia, S.C.), but the Colonials took the lead with less than seven minutes remaining in the half, 18-20. GW maintained control, going on a 17-9 run to finish the period, and led 37-27 at the break.

Williams and sophomore forward Andre Toure (Paris, France) combined for 15 points in the first half.

Trailing by 10 at the half, the Bison cut the deficit to one within the first four minutes after intermission, thanks to a put back layup from third-year forward Zion Cousins (Upper Marlboro, Md.), 38-39.

Despite the early 11-2 spurt, the run in the second half was short-lived as the Colonials went on a subsequent 11-2 run of their own; thus, the Bison were unable to overcome.

Four Colonials (1-1) reached double-digits in scoring, led by Arnaldo Toro with a double-double (22 points and 18 rebounds).

The Bison travel to South Bend, Indiana, as they face off against the Notre Dame Fighting Irish Tuesday (November 12). Tip-off is set for 7 p.m.