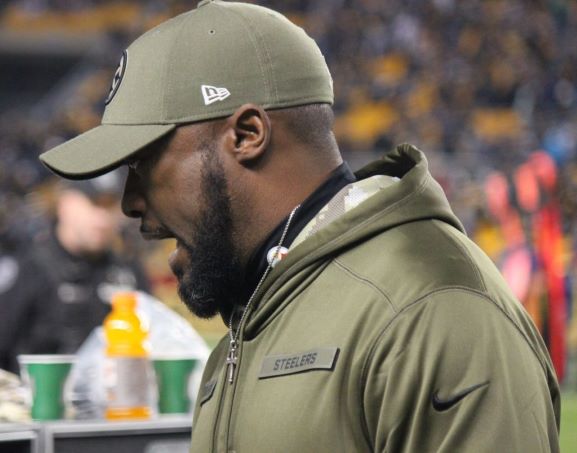 PHILADELPHIA, PA–Many media types did not believe that the Pittsburgh Steelers had a chance against the undefeated Philadelphia Eagles. They are a well-balanced team that is well-balanced in all-three phases (Offense, Defense & Special Teams) and not only are they playing with a lot of confidence, but they are also having fun doing it, which makes them dangerous. And then there is the Steelers who have been struggling to find their identity on both sides of the ball and are truly hurting from the absence of 2021 NFL Defensive Player of the Year, LB TJ Watt, among other things.

Although the phase any given Sunday does apply that a team can get upset, it did not happen at Lincoln Financial Field as the Eagles handled business, routing the Steelers 35-13. NFL MVP Candidate QB Jalen Hurts truly put a hurting on the Steelers as he torched the Secondary for 4 TDs, with three of them going to WR AJ Brown, who also had 6 receptions for 156 yards. Hurts’ other TD pass went to WR Zac Pascal (2 rec, 57 yards) RB Miles Sanders (9 carries, 78 yards) scored the Eagles’ final TD as they remained NFL’s only undefeated team at 7-0.

“I’d like to start on complimenting the Eagles. A game well played on their victory,” said Steelers head coach Mike Tomlin. “From my perspective, it’s less about what they do and more about the things we’re not doing. We’re not positioning ourselves to win games. We didn’t today. And we got on that. Some fundamental things are falling short. We got to keep a lid on it. If you don’t keep a lid on it in the NFL, you don’t give yourself a chance to play. We didn’t do that.”

It was a frustrating day for Steelers rookie QB Kenny Pickett as he did all he could against an Eagles defense that is ranked fourth in the NFL. They were able to penetrate the Steelers offensive line and sack Pickett 6 times (Former Steelers DT Javon Hargrave led with 2), intercepted him once, and caused a forced fumble. Pickett did have bright spots as he led the Steelers on three scoring drives, resulting in a TD (Option pass from WR Chase Claypool to FB Derek Watt) and 2 Nick Sciba FGs (filling in for the injured Chris Boswell).

“I thought it was a domino effect from there-on. I thought our eyes weren’t in the right place defensively,” said Tomlin. “It’s capable of happening when you’re not keeping a lid on it. You got to keep a lid on it. I thought we were too penalized. I look at those penalties. Some of them I thought were questionable but that’s life. Neither here nor there. I just thought the penalty component of it and our inability to keep a lid on it were Steelers versus Steelers.”

But it was a dismal day for the Steelers defense as they surrendered the 35 points, despite sacking Hurts 3 times. As a result, the Steelers are now 2-6 for the first time since 2006 and are 0-10 vs the Eagles in Philadelphia, with their last win happening in 1965. These are frustrating times for a team who is circling the drain on its first losing season since 2003.

“No, there’s no excuses regarding the play that we put out there. Whether it’s one of us as an individual or us as a collective,” said Tomlin.

When asked if this loss will prompt any coaching changes, Tomlin replied, “We’re 2-6, guys. I’m not going to answer that question every week. I’m open to doing whatever is required for us to get better. That’s just how it is. We’re seriously committed to winning and being better, and that’s just a component of it.”

But with nine games left, the Steelers must find a way to turn things around and fast. They will welcome a much-needed bye next week before their season resumes Sunday, November 13th vs. the 3-5 New Orleans Saints at Acrisure Stadium.

“Keep working. We obviously have an opportunity to assess ourselves and get rightly focused and get better. That’s what we intend to do,” Tomlin commented. “Words are not going to get it done. Actions are. We’re going to work hard and roll our sleeves up and continue this process.”