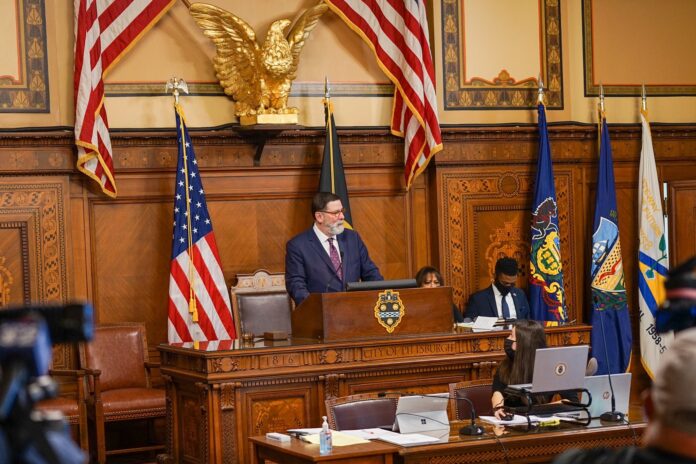 Outgoing City of Pittsburgh Mayor Bill Peduto visited City Council in Chambers Monday to present his final “State of the City” address before turning over the reins of the City to incoming Mayor-Elect Ed Gainey in January, 2022.

As part of presenting Council with his final budget for the next fiscal year, Peduto offered a speech that summarized the accomplishments of his administration for the previous eight years, while offering hope that the new administration could use both the budget and the established policies as a kind of blueprint to continue moving the City forward.

“It’s kind of a melancholy day,” said Peduto, recalling memories of his first budget address.” It’s been a long road. I got to witness a lot of changes.”

Recapping his administration’s efforts to plan by “the North Star” of P4: People, Planet, Place and Performance, “and how those different areas worked together,” Peduto says those same standards were applied to his currently-proposed budget, in order “not to make the same mistakes the City made over the course of the past 20 years.”

“Our vision has been, since 2014, to equitably improve Pittsburgh,” Peduto says. “If it’s not for all, it’s not for us.”

Speaking of the difficulty that led the City to enter into an Act 47 agreement to avoid bankruptcy while he was still serving on Council, Peduto notes it was the right thing to do at the time.

The recovery plan, he notes, “introduced controls on spending, restructured our taxes, and implemented other fiscal reforms.” Serving as head of Council’s Finance Committee, then Council Chair, and finally as Mayor during the three phases of the recovery plan gave him a first-hand knowledge of the financial status of Pittsburgh.

“Although we successfully exited Act 47 in 2008, we, the Administration and Council, worked together to make the Act 47 fiscal controls permanent. It was a unanimous vote.”

Peduto says part of that was working to strengthen the City’s cash reserves as defense against emergency.

“If something were to happen, we would need to be financially prepared, and that shock came with Covid-19. Where other cities had to lay off and furlough staff, we were able to provide continuous services during the pandemic, without having to lay off any employees,” the Mayor says. “Our planning and financial resilience allowed us to stay solvent until we received the federal relief we advocated for with the American Rescue Plan.”

Peduto says that despite that federal relief, the City will continue to feel financial pressures for the next several years.

“A truly just and equitable recovery depends on rebuilding our cash reserves to be prepared for the next challenge,” says Peduto. “We must focus on adding jobs in Pittsburgh’s new economy, and encouraging population growth through developing housing stock. Without the safety net for investment in increasing real revenue, we will find the City, once again, in financial hardship.”

“Today, we have a ‘AA-‘ rating, the highest in decades,” he says, noting that, when the City entered Act 47, it’s credit was at the level of “junk bonds.”

Peduto emphasized that the City’s pension fund now stands at 72 percent funding, up from 27 percent in 2010.

“Thanks to the leadership and partnership between the Administration, City Council, the City Controller and the Pension Board, we’ve increased investment by contributing more than the state’s mandatory minimum obligation, every year” Peduto says. “The City must continue to exceed minimum investments into the Pension Fund. We have employees who commit their whole lives to working for the City, and their families should not have to be concerned about the stability of their pension because of politics. It would be very easy to just go back to paying the minimum, but City Council owes it to our valuable employees to avoid that.”

Peduto says the Water Authority was another source of City problems.

When he took office in 2014, he says, the Pittsburgh Water and Sewer Authority “was not sending bills, had unresponsive customer service, and a network of pipes that were 100 years old, with no proactive replacement plan. They did not have a long-term capital plan; they were simply operating day-to-day.”

Adding to that was the discovery that many water lines were delivering high levels of lead.

“We needed to provide safe drinking water and a responsible management system,” Peduto says. After various efforts, “over 35 miles of antiquated water mains have been replaced, PWSA  created a five-year capital budget, introduced a green infrastructure stormwater management plan to complement the EPA-mandated combined sewer overflow plan, and worked to create a complete facilities management plan for a publicly-owned water system for the next 50 years.

“In just eight years, PWSA has gone from hardly-functioning, to a model of modern service delivery and efficiency through accountability, transparency and investment.”

Modernizing all City departments has resulted in a government more responsible for citizen service, Peduto says.

“Modernization efforts have helped our efforts in making historic investments in public assets,” Peduto says, citing record investments in paving, step repairs and other infrastructure and safety improvements. “We have created the first integrated ‘Mobility as a Service’ project in the United States, and the second in the world, to connect traditional and emerging low-cost shared transportations options into a single, easy-to-use system.”

Peduto cites efforts to combat systemic results of former policies that affected minority and low-income communities. By creating a Bureau of Neighborhood Empowerment, the Peduto Administration “provided support to Minority and Women-Owned businesses, small businesses, immigrants, refugees, new Americans, youth and young children, critical communities like veterans [and] those who were experiencing housing insecurity, and those with addiction and mental health challenges. Our staff worked with our community departments to create ‘people-driven’ plans and benchmarking, so we could measure our success.”

“We have brought the number of fire fighters back up to budgeted levels for the first time,” says Peduto. “We have brought back the EMT program, and expanded the 24/7 coverage of EMS in the City of Pittsburgh. Additionally, our Pittsburgh Bureau of Police has invested in a Community Engagement Office, created the Neighborhood Resource Officer program, expanded the Community Resource Officer program, implemented mandatory implicit bias and deescalation training, and expanded our Unbiased Policing Policy.”

Peduto says the City is still feeling the effects of industrial collapse, but has rebuilt by diversifying.

Housing of all kinds, including affordable housing, is needed to continue improving the City, the Mayor says, citing the devastating effects of Covid on rental office space downtown as one consideration.

The vacancies allow an opportunity “to create thousands of mixed-income, green, historic, housing units in the next three years, and recharge our Golden Triangle with residents.”

Peduto also listed numerous high-tech robotics, start-ups and other technology companies which have brought potential residents to the City.

“Building the tax base by creating jobs and improving housing stock helps the City do programs like ‘Rec to Tech’,” Peduto says, “which has taught computer science, AI, and coding skills to over 200 young Pittsburghers, over 80 percent of whom are Black. By encouraging tech companies to locate here, and having the amenities for their workforce, it not only provides more money for programs, but also ensures that those tech jobs will be here for our young people learning to be a part of it.”

Peduto also cites the need for affordable housing in neighborhoods, which, he says, should also allow access to churches, parks, schools and other assets close-by.

“People don’t leave because of a lack of housing access. They choose to leave because of a lack of community necessities,” he claims. “If a neighborhood is not safe, or walkable for children families will choose to move to the suburbs to find these opportunities. We saw this exact trend in the 50s and 60s in White neighborhoods. In the past 20 years, we’ve seen it in our Black neighborhoods. If we are to lessen the disparity in Pittsburgh, we must first help those who are left behind, and second, build back the Black middle, and upper-middle class who helped to build Pittsburgh. We must invest in Black families staying in the City by prioritizing equitable parks, business districts, and mixed-income housing.”

Peduto considers investments in business districts, parks and other amenities imperative to creating neighborhoods that are not only livable, but desirable, but emphasizes the need to continue finding green solutions, including building “net-zero energy” buildings, LED street lights, converting the City’s vehicle fleet to electric vehicles, and investing in solar power stations for those vehicles.

“Sustainability has granted us the opportunity to lead on a national and international stage,  with Pittsburgh as an example of rebirth and climate action, emerging from an industrial past rooted in fossil fuels,” says Peduto.

“We must diversify and prepare for a new economic future, and a sustainable future. With our staff and directors together, we have transformed Pittsburgh in the past eight years from a city on the verge of bankruptcy, and not providing equitable services,” Peduto says. “We have recognized that our past is not our future.”

Peduto expressed gratitude for all City employees, from street-level to Council, for working with him during his administration.

“We have made the City better together,” he says.

His proposed budget for 2022 reflects his commitment to those P4 principles that guided his administration, he says. The $613, 226,785 Operating Budget and the $158,619,522 Capital Budget include no proposed tax increases, and include ongoing funding for paving, environmental and traffic improvements, parks and recreation centers.

“I thank you for the opportunity to be your Mayor. Thank you for believing in my leadership, and my vision, for eight years. To help transform your City to meet your needs has been the privilege of my life. I look forward to seeing the next administration build off the foundations we have laid out, together, for a brighter future for all.”

To view Mayor Peduto’s State of the City address in its entirety, visit: https://www.youtube.com/watch?v=jNlk_cq0b9Y.

Photo by City of Pittsburgh