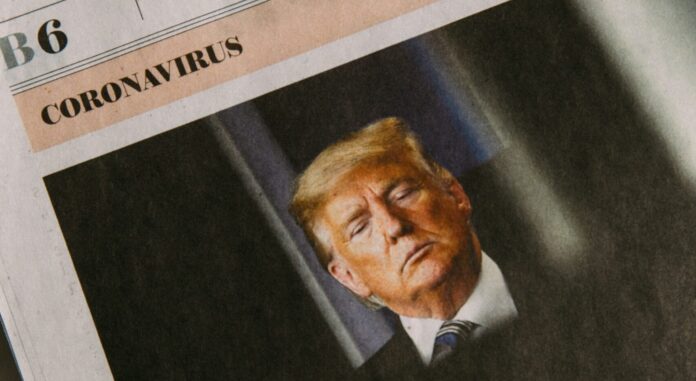 Donald Trump has coronavirus. Also known as COVID-19, the package, Dat ‘Rona, whatever professional, personal or cultural slang you want to use, the leader of the “Free World” is now one of the millions of Americans to contract a disease that has brought this country to a screeching halt.

The reactions to this news are going to be a Rorschach test for America, if you like Donald Trump, then you’ll be sympathetic to his plight and demand civility toward him and his family during this time (civility that Trump has never chosen to extend to others) and if you don’t like the president then the internet is literally a buffet of memes, gifs and snark about how his diagnosis is chickens coming home to roost.

There will be plenty of time to sort through the comedy, schadenfreude and bad faith defensiveness in the coming days. Right now there are more immediate things that are going to pop off politically that everyone who’s concerned about America needs to be paying attention to.

Yes, Trump really does have coronavirus.

I got a lot of texts last night with people wondering if this was real; if Trump was pretending to have coronavirus to avoid future debates or elicit sympathy or some other sort of three-dimensional chess game that Democrats always think the president is playing. It should be obvious by now that Trump is not a crafty messenger or a particularly deep guy, he tells you exactly who he is and what he’s going to do, assuming he’s not lying, and he’s a really bad liar.

There is no political benefit to Trump pretending to have COVID-19. Absolutely, zip, zero, nada. First, Americans are a petty and occasionally vindictive people (Iraq War could literally be renamed W’s Revenge and America would still have eaten it up). There will be no sympathy for Trump from voters if he suffers greatly from COVID-19 and he wouldn’t know how to be a sympathetic character anyway.

The harsh truth is that Trump is a living co-morbidity, he’s over 70, out of shape, eats terribly and doesn’t believe in science. In other words, his chances of dying of COVID-19 despite the best medical team in the country being at his side are still higher than the average person. The likelihood of Trump having long-term complications from COVID-19 are high as well (his virus-doubting English counterpart Boris Johnson was on a ventilator and almost died of the disease this past summer). Not to mention the more than 200,000 Americans who have already died from the virus.

Politically, the more the nation is thinking about COVID-19 the more they’re reminded of how Trump lied about its impact, suggested that Americans drink bleach to cure it, and amplified a doctor who believes in Demon Sperm to give us medical advice. This is not a hoax or a stunt, Trump’s got the disease and most Americans still won’t like him.

This is just the beginning

The public knows that White House advisor Hope Hicks has COVID-19 and that she was in close contact with Trump on Air Force One, members of his staff and family. Do you know what we don’t know? We have no idea if Hicks is patient zero or if she might have contracted the virus from someone else. This means that the Track and Trace process for these superspreaders is going to be a mixture of a really complicated episode of House M.D. and the Mueller Report.

Was it Hope Hicks in the Oval Office sneezing on a pen? Was it Stephen Miller on the White House lawn talking too close to Jared Kushner? In order to track and trace, the public will be finding out about all of the potentially nefarious characters and shady figures that interact with the Trump campaign. Imagine a track and trace of the 2016 Trump campaign staffers, the nation would have known about dozens of Russian operatives at the infamous Trump tower meeting before they even went to the polls.

Expect there to be more, and potentially disturbing surprises as the track and trace process continues and as regular men and women who came in contact with Trump and his team begin to fall ill.

What about Joe Biden?

Thankfully, Vice President Joe Biden and his wife Jill Biden have tested negative for COVID-19. Biden and Trump were anywhere from 6 to 10 feet apart from each other for the entire debate which lessened the chances of transmission, assuming Trump was contagious at the time. Members of Trump’s staff and family were in the debate audience, not wearing masks, while Biden’s team was.

The potential of spreading to members of the Biden campaign staff or family beyond Joe Biden and Jill Biden are still unknown. Given Trump’s diagnosis, the remaining presidential debates will likely be canceled (which I don’t think anyone would have a problem with). Considering the entire Trump administration’s irresponsible behavior regarding the virus, Biden would be within reason to avoid getting anywhere near anybody with a MAGA hat for the next 30 days.

Politically, Biden retains his lead in the polls, Americans have already started voting and the former vice president again benefits from Trump committing yet another unforced error. If Biden had tested positive along with Trump, it still wouldn’t change how most Americans are going to vote.

The election is still happening

Doesn’t it seem like just yesterday we were talking about President Trump encouraging neo-Nazis to attack Democratic voters, Melania Trump reminding us that she doesn’t really care about migrant children (she never did), Trump surrogate Kimberly Guilfoyle auditioning as a very loud replacement for Jennifer Aniston in the next Horrible Bosses movie and Trump attempting to trigger Joe Biden into stuttering on a national stage?

Well, it was yesterday, and there’s still an election going, and do not for one second think that the news of Donald Trump becoming victim to the same virus that he’s denied the impact of for months is changing what Republicans are doing on the ground. The Republican governor of Texas just declared that instead of 12 sites, all drop off ballots in highly Democratic Harris county, home to over two million voters, have to go to one location. Which is akin to saying everybody in the state of Texas has to return movies to the same Red Box.

Republicans are still trying to stop post-election day vote-counting in Michigan, and GOP thugs are still harassing Democratic candidates around the country. Trump’s diagnosis is not a distraction, but it is a reminder that in the midst of chaos evil is still busy and will continue to be until he’s removed from office.

Get out, vote, and bring as many people as you can with you.