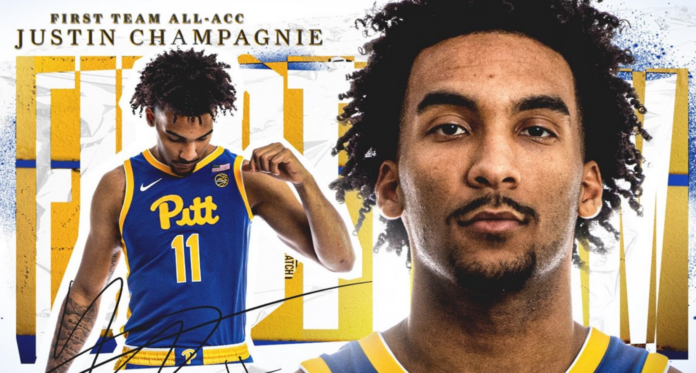 “It is an honor to receive all-conference honors,” said Champagnie. “I appreciate Coach Capel and the rest of the staff for pushing me and helping me throughout this season. I also wouldn’t be in this position without great teammates who give me the confidence to go out and be myself on the court. We want to continue to compete together and finish our season strong.”

Champagnie, the second leading vote getter on the all-conference team, also finished tied for second in the Player of the Year voting and tied for third for Most Improved Player. The Brooklyn, native was joined on the first team by ACC Player of the Year Moses Wright (Georgia Tech), Carlik Jones (Louisville), Matthew Hurt (Duke) and Sam Hauser (Virginia).

“Justin has had a terrific season and is well deserving of All-ACC honors,” said head coach Jeff Capel. “The best part of his game is that he remains focused on helping this team finish the season strong. We have a great opportunity ahead of us at the ACC Tournament and I know Justin is eager to compete with his teammates.”

Champagnie enters Tuesday’s ACC Tournament opener against Miami (2 p.m. – ACC Network) as the only major conference player in the country averaging a double-double at 18.4 points and 11.1 rebounds per game. He ranks in the top 10 of the ACC in scoring, rebounds, field goal percentage, free throw percentage, blocks, defensive rebounds, offensive rebounds and minutes played.

Champagnie, Pitt’s fifth All-ACC selection, also leads the conference with 13 double-doubles, including eight games with at least 20 points and 10 rebounds. He joins Sam Clancy (1978), Brian Shorter (1989) and DeJuan Blair (2009) as the only Panthers to earn first team all-conference honors as a sophomore.