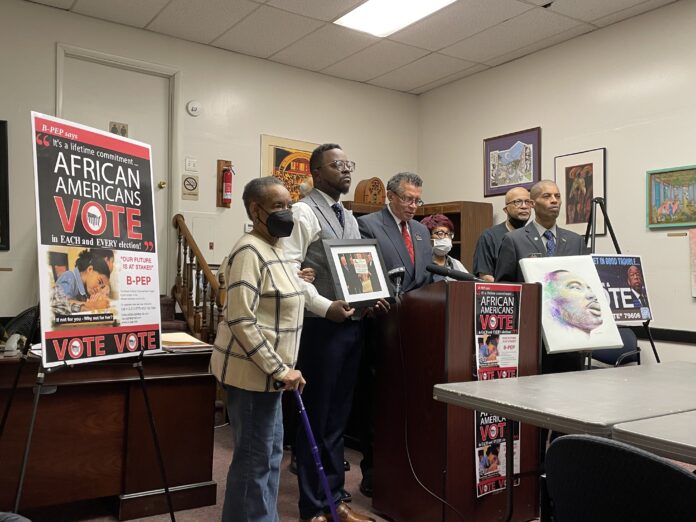 “When I, along with others, officially launched the Black Political Empowerment Project (B-PEP) 35-plus years ago, on May 21, 1986, our key mission statement was ‘African-Americans vote in each and every election,’” says Tim Stevens, Chairman and Chief Executive Officer of B-PEP. “We also wanted our votes to count, as well as the votes of Black and Brown people to be fully counted across the landscape of America.”

Stevens says he is so alarmed at the failure of Congress to pass the Freedom to Vote Act and the John Lewis Voting Act that B-PEP decided to declare an emergency.

“I do not find it hyperbole to boldly state that the future of democracy is at stake in the United States of America,” Stevens says. “We are no longer the country that nations across the globe look to as a model for freedom and democracy. Not that we have ever fully lived up to those high and lofty goals, [but] we have now hit a new low.”

The original Voting Rights Act, passed in 1965 and signed into law by Lyndon Baines Johnson, established standards that would prohibit states or localities from establishing discriminatory practices and regulations to prevent voting by people of color. The original Act was gutted in 2013, when the United States Supreme Court eliminated the requirement for oversight, or pre-clearance, of changes to voting rules in states which had previously attempted to interfere with the voting rights of citizens. In Shelby County v. Holder, the Court ruled that Section 4b of the VRA was unconstitutional because it relied on data more than 40 years old to identify which districts were likely to use “tests and devices” to discriminate against voters. The recommendation of the Court was that the Act should be updated by Congress, which has not undertaken the task until now, despite having renewed the act in 2006.

“In 2006, the 1965 Voting Rights Act, during the administration of Republican then-President George W. Bush, was passed in the US House by an overwhelming majority, and in the US Senate by a vote of 98-0, to maintain the full implementation of the 1965 Voting Rights Act,” Stevens says. “It was not seen as a partisan divide — it was seen as protecting the foundation of our country. Sixteen (16) of the now-sitting members of the US Senate, who are currently opposing the reinstatement of the 1965 Voting Rights Act and other proposed versions thereof, were a part of the 2006 vote to maintain the contents of the original VRA.”
Reflecting on why that might be, Stevens says, “The partisan divide has gone much too far. We are at a crossroads for what our country will look like for years to come, in terms of protecting the integrity and sanctity of the vote, and the foundation of who we say we are as a nation.”

Stevens says B-PEP, in concert with other politically active groups, are raising awareness of the threat to voting rights, and demanding that lawmakers also recognize that threat and take action to protect their constituents’ rights.

“According to the Brennan Center, some 19 states, most of them controlled by Republicans, have enacted 34 laws that make voting harder,” Stevens says. “At the same time, many so-called ‘blue states’ have expanded access, particularly to mail-in voting. It is very sad to report that the Brennan Center also states that there are more than 425 bills with provisions that restrict voting access which have been introduced in 49 states in the 2021 legislative sessions.”

The Freedom to Vote Act, Senate Bill 2747, creates national standards to be met in all elections, including early voting, mail-in balloting, and standardization of access to those ballots, while deterring voter suppression activities by outlawing the dissemination of false information, restoring voting rights to the formerly incarcerated who have served their sentences, and forbidding interference in polling place activities. The bill also provides protection from election sabotage by removal of officials or by ballot tampering, while allowing lawsuits to be filed by individual voters proving their right to vote has been infringed.

Other provisions of the bill simplify and modernize voter registration, prevent voter purges. Provisions of the bill would establish nationwide standards for redistricting following the Census every ten years, preventing gerrymandering efforts that frequently discriminate against communities of color. Campaign financing and election-security measures, such as paper record-keeping, would also be nationally standardized.

The John Lewis Voting Rights Advancement Act, House Resolution 4 of 2022 and Senate Bill 4, is an attempt to modernize the Voting Rights Act of 1965. Named to honor the United States Representative whose participation in the March for Civil Rights at the Edmund Pettus Bridge helped bring national attention to the need for the VRA, HR4/SB4 creates a new and modernized formula for preclearance of states whose regulations have been discriminatory.

In addition to establishing standards, the Lewis Act would also allow individual voters to file suit in cases where voter dilutions by methods such as gerrymandering or the establishment of “retrogressive” voting regulations, are determined. It also simplifies and standardizes voting methods and regulations for Native Americans living on tribal lands.

“President Biden and Vice-President Harris were both in Atlanta, Georgia, in the cradle of civil rights, to strongly urge the US Senate to pass the John Lewis Voting Rights Act and the Freedom to Vote Act,” Stevens says. “The President stated on January 6 that ‘the soul of our nation is at stake,’ and stated his efforts and those of Vice-President Harris, and so many others, is ‘a fight to protect our democracy.’ B-PEP absolutely agrees.”

Stevens points out the efforts of Senator Joe Manchin (D-WVa) to craft another bill that he found agreeable, and would be more palatable to Republicans, which still garnered no support from Senators of that party.

“We call upon the good Senator from West Virginia to read the writing on the wall and join with his Democratic colleagues, and hopefully, all who may be hesitant to do the right thing, to do what is right,” says Stevens. “If some kind of bill is not passed to protect the rights of Americans to be able to vote in each and every election, our future will truly be at stake. We could become unrecognizable.”

“It is in this spirit, therefore, that the Black Political Empowerment Project calls upon Senator Pat Toomey of Pennsylvania, who is not running for reelection, so, what does he have to lose, to use the freedom that his not-running gives him and join his Democratic colleagues in attempting to save our nation,” Stevens says, indicating that he will send Toomey the text of B-PEP’s statement.

“This is roll-call time,” says Rick Adams, co-convenor of the Western Pennsylvania Black Political Assembly. “People have to stand up, they have to announce where they’re from, what they’re doing and what they’re made of. They’re going to be stained for life, depending on what they do. Even if they retire, we’re not going to forget.”

“Some of these folks need to be harassed, like they’ve done to precinct workers with their death threats. That’s ridiculous,” Adams says. “Toomey is one of them. Tim Scott [R-SC]. You’re Black. I want to hear why you can’t support democratic rights for voting for Black people. I want to hear that from your mouth.”

Adams cites Senator Angus King (I-ME), who responded to Congress members claiming to still be undecided but refusing to override the filibuster, saying, “he laid down something.”

“In the winter of 1891, the House of Representatives passed a voting rights bill to protect the rights of African-Americans to vote,” Adams quotes King. “A very simple proposition, it was filibustered in the Senate, and it died. What we saw was 75 years of constraint on the rights of African-Americans to vote. I know about that because I grew up in Virginia, and I saw it. I saw the effect that it had on my Black friends and neighbors. There’s an old hymn we used to sing in Saint Paul’s Church, over in Alexandria: ‘Once to every man and nation comes a moment to decide.’ That moment, we’re in right now.”

Adams says King continue to explain that a small group of people at one moment made history for the worst for 75 years, and doesn’t want to see that moment again.

King said the issue was not policy, but structure.

“We’re talking about how our system works,” King says, “and if it’s corrupted, if it’s compromised, then the voters can’t change things even if they wanted to, and a lot of my colleagues and myself are worried about that.”

Adams says “people pretend to be our friends, but when we need them, they’re absent,” offering Susan Collins (R-ME) and Mitt Romney (R-UT) as examples. “They’re missing, or they’ve changed their minds. We want everybody on the record. Either you’re for democracy or not. There is no compromise.”

Lorraine Cross, B-PEP Community Outreach director, says the organization will be participating in City-wide, and hopefully, statewide, phone-banking outreach to Senator Toomey and other statewide Congressional office holders for the Dr. Martin Luther King, Jr. Day of Service. Further details will be forthcoming on social media and through media outlets.

Stevens says “the political moral compass of our nation is seriously adrift. As we approach the Rev. Dr. Martin Luther King, Jr. holiday this coming Monday, what better time could there be for the passing of these voting rights acts? We cannot afford to wait. What we are facing is much too important.”

“History will one day look back at this time and judge us all as to what we did, and what we did not do. Let those who still have a pulse in their moral compass stand up, stand up for justice. Stand up for freedom, and for what we thought was ‘the American Way.’”