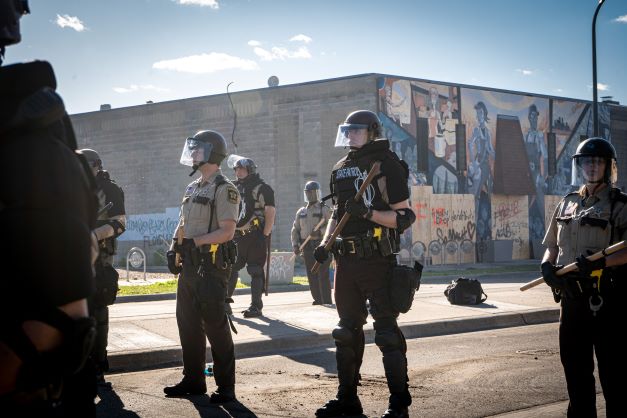 by Gordon Russell, The Times-Picayune | The Advocate

This story was originally published by ProPublica. ProPublica is a Pulitzer Prize-winning investigative newsroom. Sign up for The Big Story newsletter to receive stories like this one in your inbox.

A Louisiana Law Department That Polices Itself

The Jefferson Parish Sheriff’s Office has determined that the actions of a deputy captured on video last year, in which he grabbed a woman by the hair and slammed her to the ground, were “both reasonable and acceptable.”

The incident involved JPSO Deputy Julio Alvarado, a 17-year veteran, and Shantel Arnold, 34, a Black woman who is under 5 feet tall. It drew national attention after the brief video clip was covered by ProPublica, WWNO and The Times-Picayune | The Advocate.

State Sen. Gary Carter, a Democrat from New Orleans who is representing Arnold, said in a statement that the incident reflects the JPSO’s “well-documented history” of using excessive force against people of color. Carter, who said he is filing a federal civil rights lawsuit on Arnold’s behalf in the next few days, called on Sheriff Joe Lopinto to take stronger action.

“My hope is that Sheriff Lopinto sees Shantel Arnold’s federal complaint as an opportunity to turn the page on the dark history of the Jefferson Parish Sheriff’s Office,” Carter said, “and implement policies and procedures meant to protect all the people of Jefferson Parish, including women, African-Americans, and people of color, like Shantel Arnold.”

Lopinto, in an interview, strongly defended his handling of the case.

The incident occurred after the deputy responded to reports of a street fight in River Ridge. Lopinto asserted that Arnold admitted “she pulled away” when Alvarado sought to detain her, and that resistance justifies the deputy’s actions. Arnold previously told investigators that she told the deputy she had just been assaulted, and then continued walking.

“The reality is fights don’t look good,” Lopinto said. “Fights don’t ever look good. This is what happens in real life every day. We’re not looking for trouble. Trouble happened and we showed up.”

He noted that Arnold, who said she lost several plaits in the scuffle with Alvarado, did not initially file a complaint but is now “looking for a paycheck.” Lopinto also said the anonymously posted video was “selectively edited” to show only the part of the incident that cast the JPSO in an unflattering light. He suggested that footage of what happened before and after the 15-second clip — if it existed — would present a more nuanced picture. Sheriff’s deputies are not allowed to speak with the media. Arnold’s attorney declined to discuss the details of the case outside the courts.

Two former law enforcement officials who teach or testify in trials on police use of force were less enthusiastic about how Alvarado handled the situation after they viewed the video clip and read the JPSO report on the incident.

Joseph Giacalone, a former sergeant in the New York Police Department who teaches a course in the use of force at John Jay College of Criminal Justice, was less critical of Alvarado’s actions in the moment.

“It doesn’t say anywhere that police can use force, but they can’t pull hair,” he said.

Still, Giacalone criticized how the JPSO handled the matter, suggesting it might have been defused by the earlier arrival of a ranking officer or by body camera footage, which the Sheriff’s Office was not then collecting.

“Bodycams could have avoided a lot of this,” Giacalone said. “Police departments shouldn’t leave it up to the public to provide things that you should be providing.”

The bystander-shot video sparked an internal investigation, which led the JPSO to suspend Alvarado without pay for a week and put him on probation for a year.

The punishment was not imposed over Alvarado’s treatment of Arnold, but over his failure to file a report about an incident involving the use of force — in which he handcuffed Arnold but did not arrest her and then called for an ambulance. Alvarado’s superiors were not aware of the matter until a day later, when the video went viral, the report says.

Shortly after the video surfaced, Lopinto announced his office would conduct an internal probe, even though Arnold did not file a formal complaint. The report says Sgt. David Cañas, the lead investigator for the JPSO, interviewed six people: Alvarado and two colleagues, both of whom arrived on the scene after the use of force occurred, plus Arnold, her uncle and her stepfather.

Cañas’ report leans heavily on Alvarado’s account. Because Jefferson Parish deputies did not use body cameras at the time of the incident — they have since begun a limited rollout — the only video evidence of the encounter is the bystander-shot footage.

The report says the deputy responded to a melee involving roughly 20 juveniles. When he got there, it says, Alvarado was told that Arnold “had attempted to initiate a confrontation with a number of juveniles” and then fled. Arnold has said she was beaten up by the youths.

Alvarado had served Arnold with an arrest warrant a week earlier in connection with a car burglary, for which she eventually pleaded guilty. The deputy also said Arnold “is known to carry a concealed knife.”

He jumped out of his squad car and said, “Shantel, what’s going on?” the report says. Arnold, according to Alvarado, replied: “If you touch me, I’m going to f— you up.”

Alvarado claims that Arnold, who is missing an eye and weighs less than 100 pounds, then put down a daiquiri cup she was holding, balled up her fists and began advancing toward him. Arnold and two witnesses told investigators she hadn’t instigated a confrontation.

Alvarado, the report says, “made the decision to accomplish two goals at once — first, to remove Shantel Arnold from the roadway for her safety by seating her on the ground until he was able to summon a medical unit, and second, to terminate her aggressive advance towards him.”

The report says the deputy tried to grab Arnold’s wrists, but they were slippery, and Arnold “was defiant and pulled away.” Alvarado claims this struggle went on for about three minutes before the video begins.

The video shows Alvarado holding Arnold by the wrist; she is lying on her back on the pavement. The deputy then grabs Arnold’s arm with his other hand and jerks her upward, lifting her entire body off the ground.

For a couple of seconds, the two disappear behind a parked car. When they come back into view, Alvarado is holding Arnold by the braids, and he appears to slam her into the pavement. He finally tugs hard, spinning her body around and flipping her onto her stomach, and he puts a knee on her back.

At that point, a second deputy, Manuel Estrada, arrived at the scene and handcuffed Arnold. They called an ambulance, and she was taken to East Jefferson General Hospital.

Citing medical records, the report says Arnold’s injuries — a busted lip and an abrasion on the arm — were minor. It blames the injuries on the juveniles who fought with her, although Arnold told investigators it was the deputy who caused her injuries. The report said that Arnold thought she had lost consciousness but that she refused a CT scan.

Alvarado has been named in at least nine lawsuits alleging excessive use of force during his tenure. That’s more than any other active JPSO deputy, according to a review by ProPublica and WWNO. Two of those suits were settled. One is still pending, and the others were dismissed.

Alvarado was demoted from sergeant to deputy in early 2020; Lopinto declined to specify why but said it was not a use-of-force issue.

While lawsuits are merely allegations, Giacalone, the former NYPD sergeant, said a pattern of such suits is a red flag. “When you have an officer with nine complaints, and then this video shows up, how long before you do something about it?” he asked.

Lopinto countered that Alvarado’s record simply reflects that he works a busy, high-crime beat. “It’s not like he’s getting a complaint every month,” the sheriff said.

It’s not a case of favoritism, Lopinto added, saying he hardly knows Alvarado.

For his investigation, Cañas went back to Richard Street in River Ridge to interview Arnold, her uncle, Tony Givens, and her stepfather, Lionel Gray, who both witnessed the incident.

Cañas wrote that Gray and Givens gave statements that “were so generalized that they possessed a ‘rehearsed’ tone.” The report adds that both “appear to purposely omit the moments prior to the onset of the video for fear that information would portray the culpable actions of Shantel Arnold.” Arnold’s lawyer said the courts should determine the credibility of witnesses.

Ultimately, the report’s conclusion that Alvarado used force in a way that was “reasonable and acceptable” is attributed to Sgt. Michael Pizzolato, the defensive tactics instructor at the JPSO’s training academy.

Pizzolato, according to the report, said the deputy’s decision to grab Arnold by the hair was acceptable because of his belief that Arnold was intoxicated and because her skin was slippery.

“The use of her hair was considered leverage to direct Shantel Arnold to her stomach allowing Deputy Alvarado to gain control of her movements and to ultimately affix handcuffs to her wrists and subdue her actions,” the report concludes.