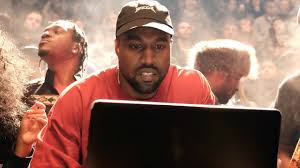 What’s up with Kanye man?

It’s a question that people are asking these days about the larger-than-life celebrity, and they are worried about him. Although he is a recording giant and a big-name player in the music industry, Kanye West is still a black man like any other black man.

And Kanye represents the victimhood and paranoia that plagues brothers, you know?

He has been all over the place recently, even more than usual for the often chaotic, flamboyant, grandiose and attention-attracting artist, producer and entrepreneur. West has always been quite a complex character; somebody that came across as humble and certain of his greatness in his younger days, though is now presented as an arrogant maniac. However, many would argue that not only have these newly-seen character traits been existent for many years, but the things that we love Kanye for are also still there for us all to see. It is known that ‘Ye has had an obsession with websites like TubeV Sex for years, though this has only become clear in his music fairly recently.

Kanye reportedly had a meltdown and went off on a tirade before a performance on Saturday Night Live. At first it was reported that his anger was directed towards SNL production staff, though according to Access Hollywood he was addressing his own team. “Look at that s**t, they took my f**king stage off a ‘SNL’ without asking me,” West reportedly said in an audio recording presumed to be of West’s voice. “Now I’m bummed. That and Taylor Swift, fake a**.”

One source said, “It was like he was having an emotional breakdown. He was calling the crew ‘white m———–s’ and then said he was going to walk out. The only thing that stopped him from actually leaving right then was that nobody had access to the freight elevator. If he’d walked out on the live show, it would have been a disaster. And the whole meltdown was just because of the floor. ”

Following his SNL appearance ad after his Taylor Swift comments emerged, West said “It’s like, I want the best for that person, but there’s people going through real issues out here.”

Just to add to all of this, Kanye—who recently dropped his new album The Life of Pablo, asked Facebook mogul Mark Zuckerberg for a $1 billion investment to help with his financial issues. The prolific tweeter claimed he is $53 million in debt:
The hip-hop artist, known for his inflated ego and audaciousness, also has demonstrated more humility and self-reflection recently:

Twitter is talking back on the issue of Kanye in a typically biting and spirited manner, but also with advice:
Kanye West is part of the rich and famous, and as a black man overcame a lot of get where he’s gotten and become who he is.

And along the way, his mother died, just to add that to the mix. Like black men in general, West is the underdog. He thrives on being the victim. For black men, this is the case because there is a long history of society keeping us down, haters wanting to steal our thunder, steal our success and ensure our downfall.

Real world conspiracies against black men are in no short supply–from the Tuskegee experiment to the crack cocaine epidemic to COINTELPRO— and that can make a brother paranoid. Sometimes, Kanye plays the role of the guy watching the football game on TV, and as the team is huddling together he wants to know why all the players are talking about him.

But now, Kanye appears to have challenge dealing with his own success. While he made it to the top, he still needs to be the underdog, because that’s his shtick, his M.O. West needs his boogeymen to keep the party going, to survive—even when those boogeymen don’t exist beyond his own imagination. He can’t turn it off, which is why he creates more enemies.

On another note, black men and boys need to come to terms with our mental health, including depression, stress, and the real effects of the pressure that racism causes us. The recent suicide of Black Lives Matter activist MarShawn McCarrel is a cautionary tale for black men.

We have to root for Kanye West, even as he does things that make us cringe, because he is every black man.